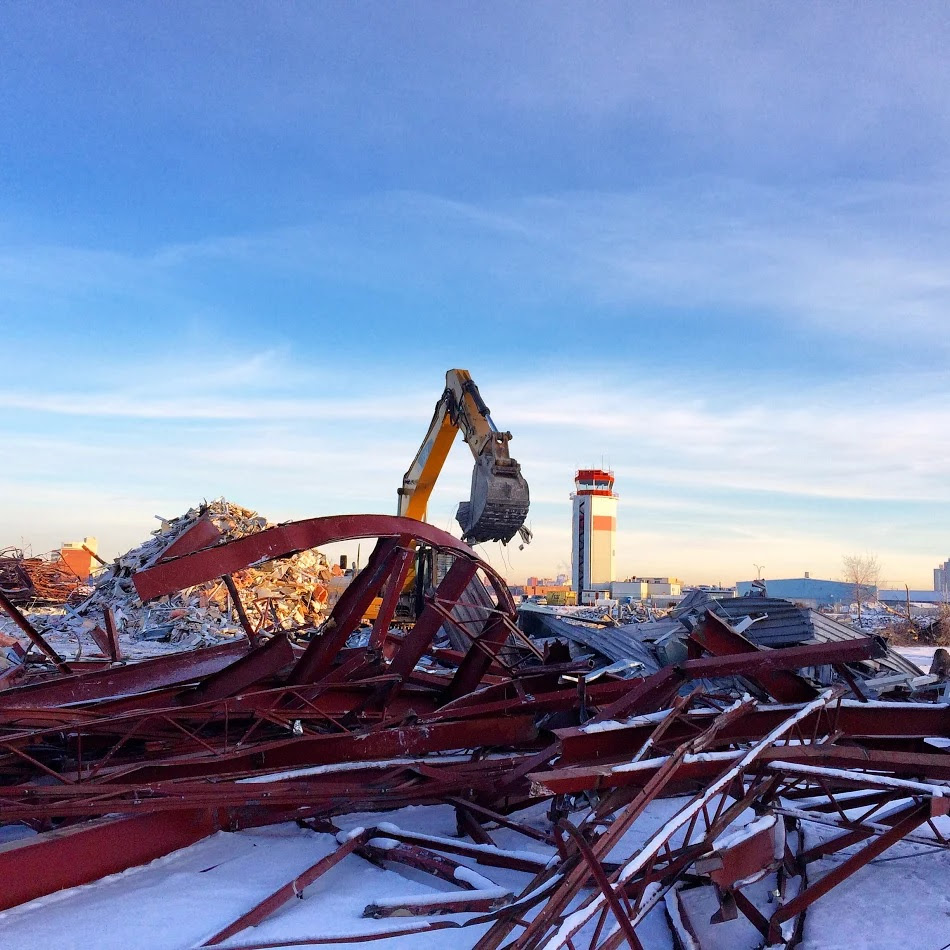 The Blatchford development has once again exceeded the recycling target set for building removal at the site. In order to maximize the community’s sustainability goals at every stage of development, the City of Edmonton set a target to divert 80 per cent of building materials from the landfill. In the second stage of building deconstruction, 93 per cent of materials from six former airport hangars was reused or recycled.

Since 2014, twelve buildings have been disassembled with a total of approximately 27,000 tonnes of materials (92 per cent) of materials diverted from the landfill.

“We felt it was important to ensure that every stage of the development process, including our pre-construction work, stays true to our goal to be a leader in environmentally-friendly community design,” said Mark Hall, Executive Director, Blatchford Redevelopment. “The building deconstruction process was one of the first areas where we could demonstrate our commitment to making this community one of the most sustainable neighbourhoods in the world.”

Through the deconstruction process, buildings were slowly dismantled to allow the materials to be sorted for recycling, reuse or waste management. Four buildings on the site were dismantled piece by piece and rebuilt off-site by private citizens.

The other pre-construction environmental activities on site include recycling of runways and re-using soil excavated from the stormwater ponds to grade the site and to eventually build a large hill in the park. Utility and road construction on the first residential stage and section of park begins spring 2017. SUSTAINABLE MANAGEMENT OF WATER
Blatchford has the unique opportunity to build environmental sustainability into the community’s infrastructure from the ground up. This means that the cornerstones of sustainability — energy, water, transportation — are all being thoughtfully designed to reduce environmental impact.

We have already shared part of our energy strategy to reduce greenhouse gas emissions in the community, and we have big plans for the sustainable management of water as well. The general strategy for water in Blatchford centres around conservation, reuse, and the implementation of on-site Low Impact Development (LID) for stormwater management. 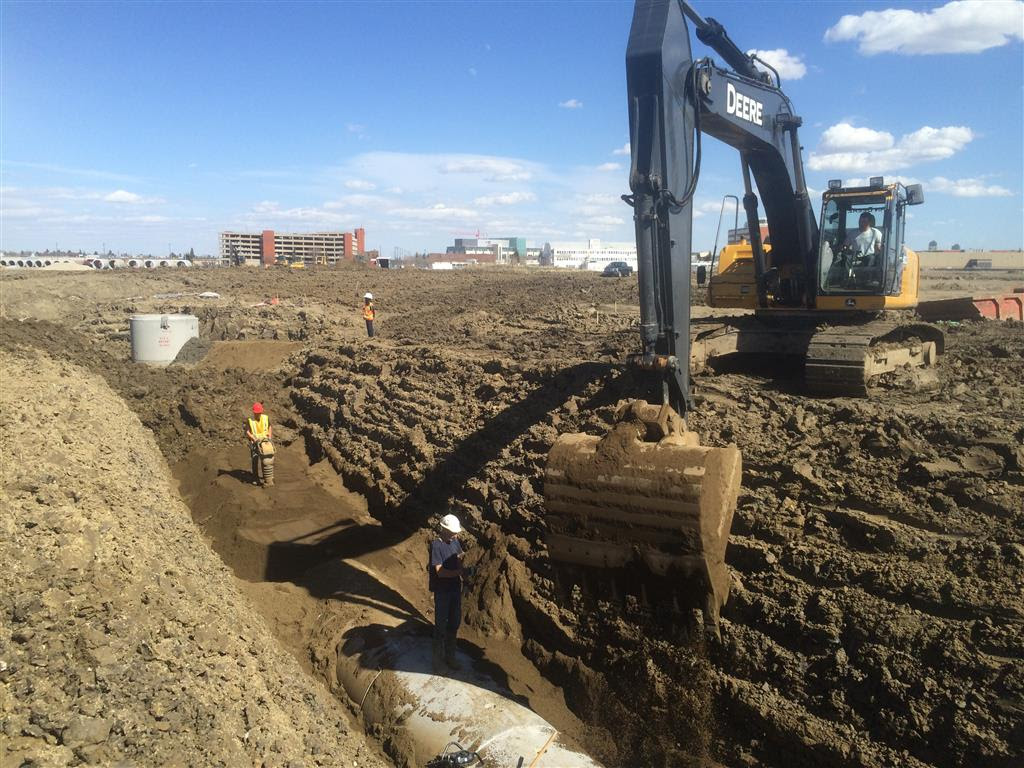 The Blatchford 2017 construction season kicked off this week,
with crews mobilizing on site to begin installation of the underground
utilities that will service the first residential stage.

The work planned for the first part of 2017 includes installation of storm,
sanitary and water servicing as well as piping for the district energy
sharing system. Once the deep utilities have been installed, the
project team can move forward with Stage 1 local road construction.
In late 2017, it is anticipated that construction crews will begin
drilling boreholes under the first stormwater pond for the geo-exchange,
which is one of the renewable energy sources for the district energy
sharing system.

"Starting another year of construction means we are one step closer to seeing the first of 30,000 residents moving into one of the world’s largest sustainable communities," says Mark Hall, Executive Director, Blatchford. "While people won't see buildings going up in Blatchford until next year, this is another significant milestone for us in terms of getting the site ready for the home builders."

In addition to the construction work, another recycling initiative is also underway at Blatchford. Approximately one third of the former runways have been removed and that material is now being crushed on site. This recycled material (concrete, asphalt and gravel) will be used to construct future roads in the community. To ensure as much of the material as possible are diverted from the landfill, any excess materials that are not required in the community will be sold for reuse elsewhere.

The builder selection process will also begin this summer, with presale of the first units expected in 2018.

There are few projects in Edmonton that promise to deliver a more game-changing boost to the urban fabric than the Blatchford Development. The vacated City Centre Airport has unlocked a blank canvas for builders, planners and architects to go wild and unleash their creative ideas. Like building a neighbourhood in SimCity, Blatchford's 536 acres will be completely transformed into one of the largest sustainable communities on the planet.
Click to expand... Crews have been hard at work at Blatchford since the start of the construction season in May. In just over a month and a half, crews have made major progress installing the underground utilities that will service the first residential stage.

The work includes installing storm, sanitary and water mains, as well as piping for the District Energy Sharing System (DESS). Crews have also been working on Airport Road to connect the utilities in Blatchford to existing services outside the site.

Once the underground utilities have been installed, the project team will move forward with Stage 1 local road construction.

Here’s a quick look at some of the work that has taken place so far this year: Crews install the main stormwater line under the future Blatchford Road. The line will carry storm runoff to the pond, where it will be held prior to discharge into the City’s downstream drainage pipe system. Crews install a storm line under what will eventually be Blatchford Road . A catch basin is installed at a new location on Airport Road. A new curb and sidewalk is installed on a modified alignment on Airport Road. Trenching for the sanitary and storm sewer pipes under the future Blatchford Road and Alpha Boulevard. Sewer installation will be followed by installation of the District Energy Sharing System (DESS) delivery system. The DESS is capable of sharing energy between buildings, which will significantly reduce overall energy demand. District Energy Sharing System (DESS) piping arrives at the site. The DESS will operate as an on-site energy system for the community.

Yes it is an older rendering @Daveography -- I just hadn't seen it before. And this is still a bugbear with me -- why can't this waterway be both a stormwater repository and a recreational pond (excepting swimming), especially with Edmonton recently instituting LID (Low Impact Development) best management practices requiring all runoff water to be captured and filtered. The city-appointed manager for Blatchford is out of his depth (pardon the pun). This could have been oh so beautiful and functional and recreational. This could have been a great venue for canoeing, kayaking, water-boarding and sailing. We should be encouraging Edmonton to "get with the times" whenever it misses the mark.

And, oh, skating, tobogganing, and sledding for that other season.

Construction update
In just a few short months, major progress has been made at the Blatchford site. Since the 2017 construction season started in May, crews have been busy installing the underground utilities that will service the first residential stage, working on Airport Road to connect Blatchford to existing utilities outside the site, and installing the piping for the District Energy Sharing System (DESS).


Check out our latest construction update for more details and site photos! 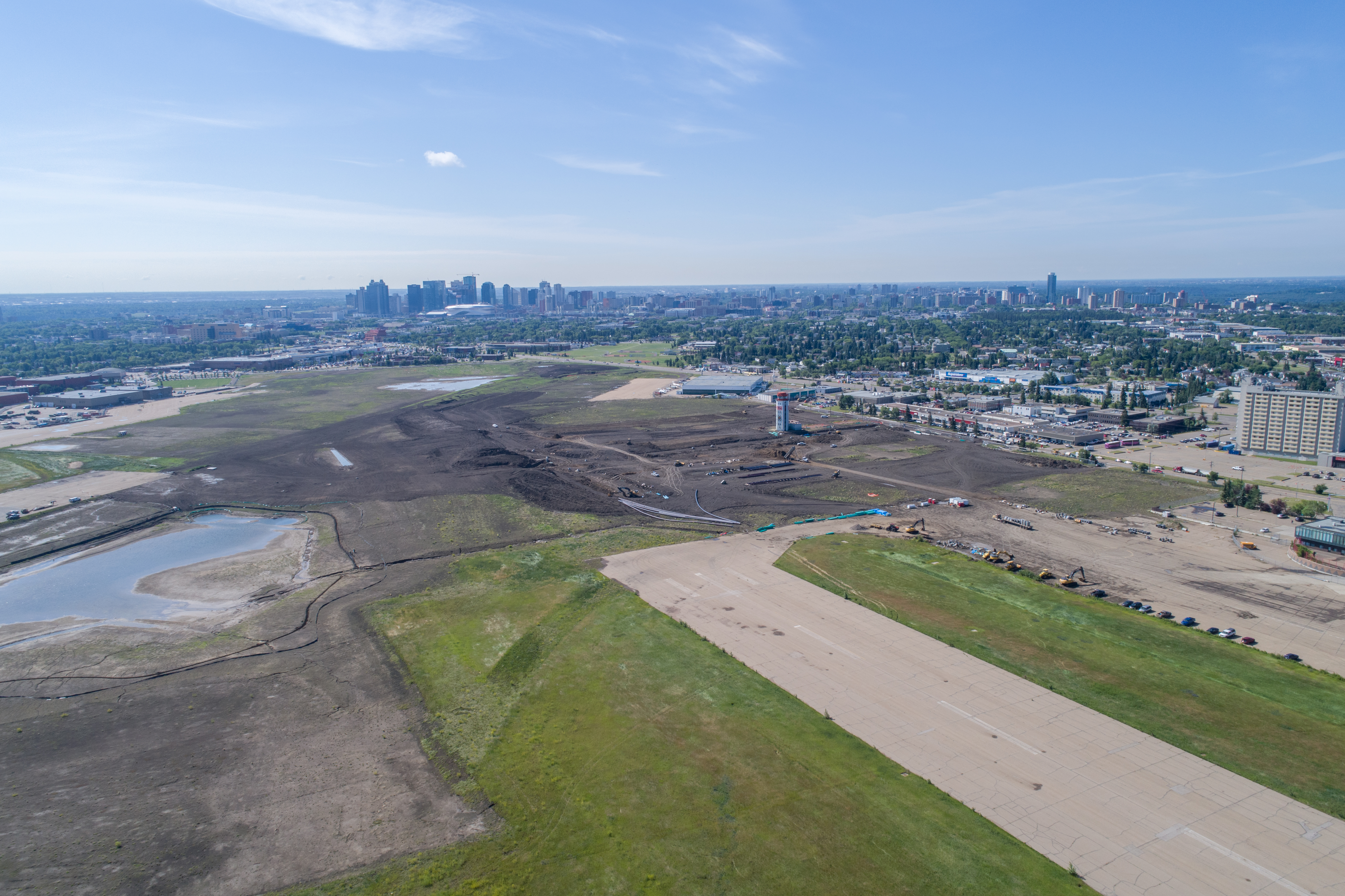 An aerial view shows the construction work at the south end of the site. The first stage of residential construction will be built around the former airport control tower. 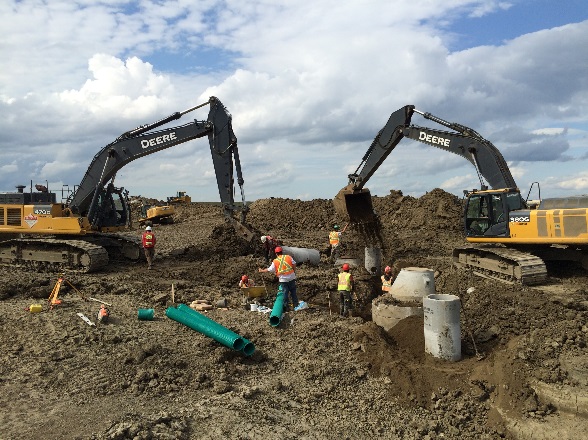 Crews install storm sewer manholes and catch basins. These catch basins will drain rainwater from the street into the underground storm sewer system which then conducts the runoff to the first of two stormwater lakes in the community.

Three months after the start of the 2017 construction season, crews have made some notable progress at the old Blatchford Field, former home of the Edmonton City Centre Airport, and future stomping ground for an enormous mixed-use community. Since May, workers have been installing underground utilities for the first residential stage and installing piping for the District Energy Sharing System (DESS).
Click to expand...