Starved of space to spread their roots, 85 trees on 124 Street died in the past three years alone, 40 per cent of the tree canopy. The others are scrawny. Planted years ago, they still give almost no shade or any of the other benefits that come with a mature canopy such as cleaner air, increased oxygen and reduced stormwater runoff.

Fortunately, new technology is starting to make a difference elsewhere. Small plastic tables stacked underground and filled with good, un-compacted soil can give the trees the space they need, even under the sidewalk or parking space.
Click to expand...

Share your vision for the future of Dawson Park

The City is hosting a drop-in open house to help shape the vision and guiding principles for the Dawson Park/Kinnaird Ravine Master Plan.

This open house will build on previous public engagement. Edmontonians are invited to provide input on how they use the park and what kinds of improvements they would like to see.

Public input will help the City develop a 25-year vision and management plan to guide development and keep Dawson Park vibrant and enjoyable.

The City also welcomes public feedback through an online mapping tool and public survey. Both are available at edmonton.ca/dawsonparkmasterplan.

The projects range from $500,000 to upgrade Calmar’s Mike Karbonik arena to $79,000 toward a spray park in Edmonton’s Steele Heights neighbourhood. Edmonton also gets $500,000 for its Queen Elizabeth Park upgrades and indigenous art park.

The $2.7-million worth of infrastructure projects will create “a year filled with pride that will create a lasting legacy,” said Randy Boissonnault, parliamentary secretary to the minister of Canadian Heritage.
Click to expand...

Breathe, Edmonton — city to release green space vision
Get ready to breathe — Edmonton’s got a plan to ensure there’s green space for everyone, as the city grows rapidly over the next few decades.

The city will release its draft strategy, called 'Breathe,' on Wednesday. Officials say the plan will ensure each neighbourhood has parks, even when Edmonton reaches a projected population of 2.1 million by 2050.

But it’s more than just a ‘parks plan,’ according to senior city planner Geoff Smith.

He said the strategy is essentially a ‘land management tool’ that looks how Edmonton parks (privately owned or not) are being used and what improvements can be made.
Click to expand...

The City is asking Edmontonians to drop in at an open house, and help shape the vision and guiding principles for the Oleskiw River Valley Park Master Plan.

Edmontonians are urged to attend and provide feedback about how they use the park and what kinds of improvements they would like to see. Public input will inform the creation of a 25-year vision and management plan to guide park development.

Can’t make it to the meeting? Provide your feedback through an online survey and mapping tool at edmonton.ca/oleskiwparkmasterplan

Shylah Kuysters and her husband Dale have run the Sequel Cafe near the corner of 102nd Avenue and 100th Street for the past six years.

She said they've rooted for the new trees to grow in the planters in front of their restaurant each year, but to no avail.

"They get broken, they get vandalized; they just don't grow very well. They're sad little trees," Kuysters said.

"Then the city comes and they cut them down. A week later a crew comes in and they replant them. They last a month, get cut down and the next year it's the same thing all over again."

Currently in all three planters sits a single stump. In 2015, the trees again failed to grow and the city called it quits.
Click to expand...

File: Alex Decoteau Park in downtown Edmonton.
Kim Smith / Global News
Downtown has had its first park since September, but there’s something it doesn’t have.

“Downtown does not have a playground,” said Ian O’Donnell, the head of the Downtown Business Association.

That’s about to change.

Fundraising has begun on a $150,000 program to upgrade Dick Mather Park. That’s the area next door to McKay Avenue School on 99 Avenue between 104 and 105 streets.

“There are multiple family friendly apartments and you often see families using that park,” O’Donnell said. “There’s a gazebo, and kids climb on it and there’s certainly grass to play with a ball, but there isn’t physical equipment. So we’re going to add a slide, a swing set and something climbable that’s contextual to the 1881 Schoolhouse.”

The DBA is working with the Edmonton Public School Board on the design and eventually the installation. The school is used for programming, and thousands of kids pass through there every year — for lessons on what schools were like when we were still in the North West Territories, or for older students studying Alberta’s political history, when McKay School served as the province’s first legislature.
Click to expand... 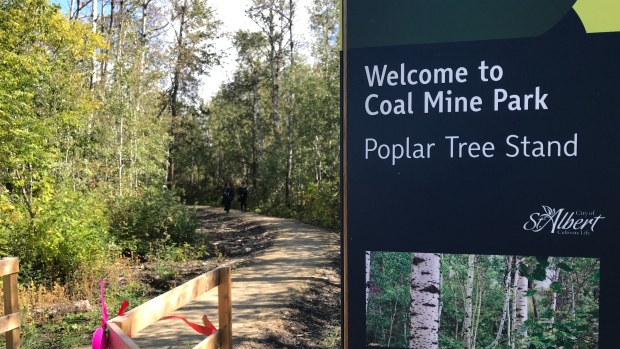 I didn't see a separate thread for Louise McKinney Park so i will "park" these photos here.
This is a great little park that has so much potential and is totally underutilized right now. We have spent, I'm guessing, tens of millions of dollars to put in all the infrastructure and amenities that are currently there and do little to nothing to promote or encourage people to use those amenities. And it's been around for almost 20 years! After separate walks through the park, my brother and i were chatting about the possibilities. That Shumka stage and oval lawn should be utilized 7 days a week (weather permitting) from May-September. Great spot for local singers/musicians/bands/dancers/etc. to promote their talents. People could just drop in with their blanket or lawn chair and enjoy whatever act happens to have booked the stage that evening. Anyway, so much potential here. (pics taken September of 2019 and Friday)

And here are some shots (September 2019) of the Chinese Garden in Louise McKinney Park. Again such a great (and likely underutilized) little spot.

This appears to be brand new.

Fun fact, I got married at Louise McKinney park. Its a beautiful park, and I imagine activity there will pick up again once the bridge construction wraps up.
SkyriseEdmonton | Daveography.ca | Flickr | Facebook | Twitter