^^fair assessment. I am leaving downtown at the end of the month after 12 years living here. It has gotten so bad that is no longer safe and tolerable for myself and my partner.

I do believe the garbage situation is cause by a lot of the homeless population ruffling through garbage bins and not putting it back.

But just the amount of sketchy people doing shady activities and drugs out in the open is really disheartening.
M

Me and my wife enjoyed a LONG walk from city hall to 124st farmers market on Sunday. Had lunch at Cactus Club and thought the DT looked clean….not too many homeless vagrants and really enjoyed ourselves……..it’s all about attitude and what you make of it.

I went to taste of Edmonton on Saturday night, walked from 115 St to City Hall. I enjoyed myself. Also passed a guy on Jasper on my way home who set fire to some material on the sidewalk and walked away and left it burning. The latter is not an unusual sight. I chose not to enjoy that.

Unlike you Debbie Downers, I have lived downtown since the early 90s and I'm not planning on leaving any time soon.

I live in a location that is central to all of Edmonton, I have amenities close by, the river valley is practically in my backyard and I'm just a few minutes walk to Churchill Square, ICE District and the Legislature. I just wish there were more people out and about who don't resemble extras from a Mad Max movie, and I also wish that certain downtown buildings with LRT access would stay fully open during the evenings and weekends (looking at you, Telus/ATB Financial and Commerce Place).

If anything will make me leave, it's the mouth-breathers with the loud after-market exhausts on their motorcycles and trucks who generate a barrage of noise every evening. When I go bed I close the windows and have a fan to drown out the noise but I wish I didn't have to resort to that.

Do you live downtown? Sometimes you get lucky, but I can tell you from my personal experience of living downtown for 6 years that this is certainly not the typical experience for most downtown residents. We pretty much walked everywhere downtown (we've now moved away as of May), and I can tell you that probably 90% of those experiences were different than what you experienced on your leisurely Sunday one-off adventure downtown. None of us are exaggerating our experiences, it is as bad as we say it is most of the time, especially in the CBD. There's a reason why we're all moving away from it, and in some cases, cities (such as myself)
Last edited: Jul 25, 2022
C

Haha by your logic...I ate three meals of food today. There are people in Africa that suffer from food insecurity but its all about the attitude and what you make of it.

I don't think it's fair to discount the experiences of the people who actually live in the area. While I'm glad you had a great time, people are not lying when they mention these rough experiences. DT currently has a lot of great things to offer and it has amazing potential, but it has some serious issues.

I used to lived DT, about a 6 minute walk away from my office. No exaggeration, on a daily basis in that short walk, I would see people fighting, passed out in the middle of the sidewalk, yelling profanities, and/or other aggressive behaviour, all at 8 AM. It was way worse after 5PM and on weekends. I still experience these things, even now, where I only come downtown once a week for work. During my brief 15 minute walk in the morning for an appointment, I almost always come across the same behaviour - people shouting and screaming at the air, rifling through garbage and dumping things on the sidewalk, or, my absolute least favourite, those who feel the need to follow me closely down the block and ask for a lighter/change/my phone/etc.

I still really like downtown, but for a lot of people, it's not going to be an attractive place to live until these very real social issues can be addressed.

I think there's a variety of experiences Downtown for those who live, work or visit. I would agree with almost all points here -- sometimes its great, other times it's not so great. Living Downtown I would say should not have to be such a struggle that it is. So many wonderful people are doing their best to address issues, but there are some very systemic 'core' problems with how we deal with things Downtown that are no longer acceptable if we want a safe, vibrant, healthy place to grow the economy, encourage people to live, and attract tourists. It's a very complex set of circumstances we find ourselves in, mostly due to lack of workers Downtown and pandemic exacerbated homelessness and addiction issues. The level of crime and vandalism is out of control and under reported. Downtown does not get the level of police service it needs (Chief McFee begrudgingly admitted as much in a public hearing). Direction on these matters and the tone set all comes from City Council, none of which live or spend a lot of time Downtown. Keeping 102 Avenue closed, for example, narrowly passed by 1 vote and until the LRT is up and running I would not encourage anyone to walk down that street alone. This has all be said before, but the constant theft, vandalism and disorder does wear down on some more than other. I'm super happy to have the festivals back, see people enjoying even take ownership and pride in their Downtown. Downtown is also very dense and but small for the size of the city, there aren't enough people living or working here. But as a resident is is wearing, frustrating, discouraging at times and I am one to try to understand the issues and help solve them but even I am feeling a bit burned out by it all. (I feel I can share that with you all here as you all care about Edmonton and Downtown and that's why you're on the forum, even if we disagree at times on the issues.)
Last edited: Jul 26, 2022

Many thanks for your specific (and continued) efforts Chris.
O

I largely agree - the City and all of its residents deserve a great downtown. I think the issue is a very simple one, though. It really isn't "complex" as all the politicians say it is. I think essentially it comes down to cleanliness and safety. Get those two things right, and you're well on your way.

You have outlined @Greenspace the precise reasons why the downtown Warehouse District Park needs to be an active space and not a passive "hangout" and why 102nd Avenue needs to be a pedestrian street with lots of activities built into a solution.

^Active uses are critical to the park's success. We have been pushing the City hard on that. We (DECL) even completed a Needs Assessment of our members this spring to show the City what people want.

Until there are more businesses on 102 Avenue, and the LRT opens, it will continue to have safety issues, particularly from 99-101 streets. As this time I haven't heard anyone interested in 'activating' that avenue.

it needs to get official project status first, then it will need to undergo 18 months of public consultation to finalize a formal plan and a fifteen year full implementation strategy (so no one can ever be held accountable) following which it will then be broken down into fragments so it’s perpetually under construction and never really completed…
Last edited: Jul 27, 2022

If I can interject with some downtown news, I hear Goodlife at Commerce Place is suppose to open in September. As you were.

The facepalm is strong with this. 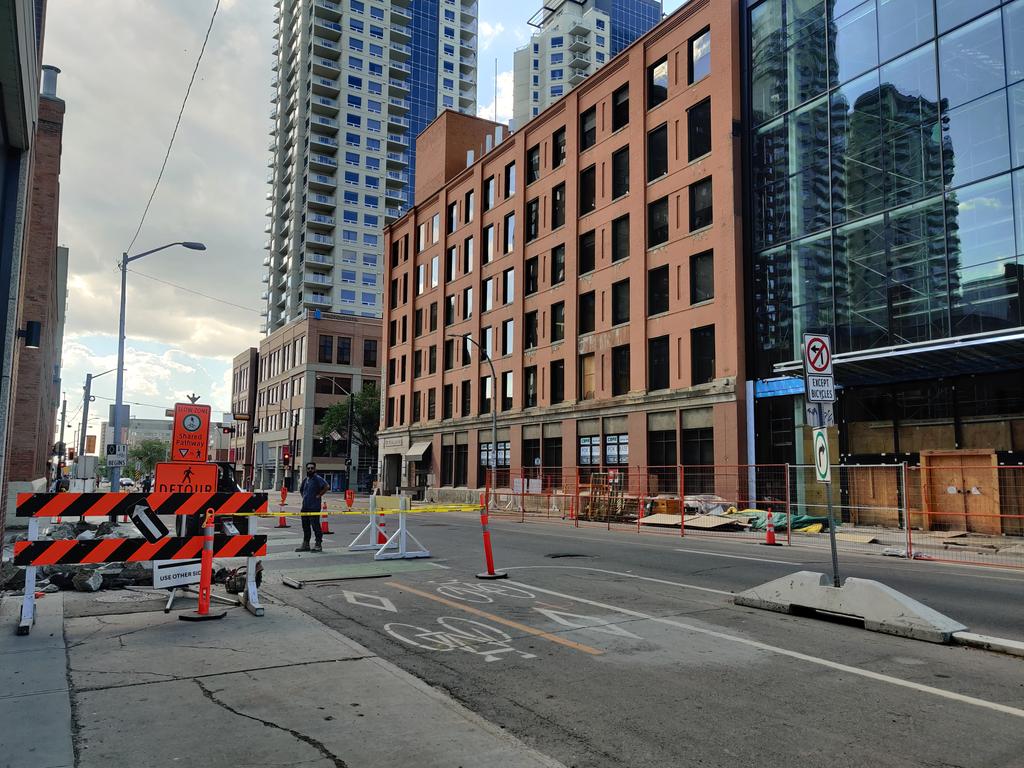