My only hope is that Regency hires a decent architect for this one.
SkyriseEdmonton | Daveography.ca | Flickr | Facebook | yeg.bike (Mastodon)

This is great news! A 45 story tower would add the density we need down 101st!

Reposting to this thread Gonna be crazy to see that disappear.

Making quick progress of it too.

There are a couple of parking structures that I would like to see gone as well within blocks of this site. And down she goes.

Wow. They aren't wasting any time. 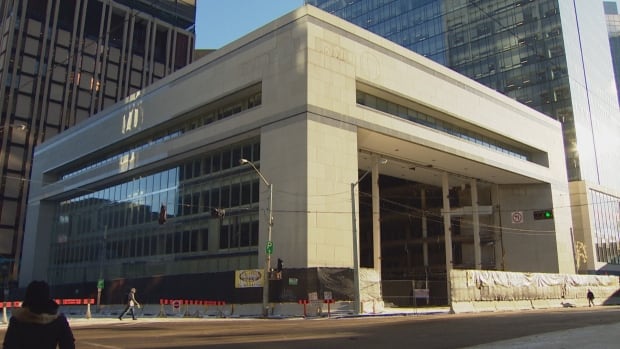 Demolition of the former Bank of Montreal building at 102nd Avenue and 101st Street started in early January and is expected to be complete by April. (Art Raham/CBC)

A stone frame and hollow belly are what is left of the former Bank of Montreal building in downtown Edmonton.

Plans for the site are far from finalized but Regency has a vision of what will replace the old building.

The company is planning a mixed-use tower with commercial space on the main level, and a hotel and residential condominiums on top.

"Everybody knows it's one of the premier corners in the core of our city," Dhunna said. "So to bring density and height and shaping that corner, a lot of people are really excited."

If approved, the new tower would be 45 to 50 storeys high, making it the tallest condo building in Edmonton.

Regency aims to complete the demolition by April and then build an underground parkade.

While this work is going on, Dhunna said the company will look at designs and reach out to potential commercial tenants.

The company aims to start building the tower in mid- to late 2019.
Click to expand... Looks like they lifted an excavator onto the top floor.