Graham Thomson: New hospital for Edmonton promised in provincial budget
Edmonton is getting a new hospital.

Sources who have seen the government’s plan say the announcement will come in Thursday’s provincial budget.

It’s not known yet how much the facility will cost or when it would open, but money has been set aside in this year’s budget for “start-up funding.”

“I can’t confirm that specifically, but I think nobody would be surprised if there was such an announcement,” said Health Minister Sarah Hoffman when asked about the budget leak. “Edmonton has been growing and has seen many pressures in our existing acute care facilities. There’s a good case to be made why that would be needed especially at this time.”

The new hospital will likely be built in south Edmonton where the city has undergone a population boom.

A formal site announcement is expected this summer, but there has been plenty of speculation the past year that any new hospital would be located near the intersection of 127 Street and Anthony Henday Drive.
Click to expand...

Seems on the low side for a hospital. City tossing in dollars too?

Budget 2017: Edmonton gets new hospital, upgrades for Royal Alex
Plans are underway for a new hospital in Edmonton, while the city’s two major existing hospitals will see a funding boost.

The provincial budget tabled Thursday shows a forecasted $10.8 billion deficit, with $400 million earmarked over four years for the planning and construction of a new hospital in Edmonton.

The location of the hospital hasn’t been announced yet, but advocates have highlighted a growing need for health services in Edmonton’s south end as neighbourhoods there rapidly expand.

The funds for the new hospital plans starting being paid out in 2018-19.
Click to expand...

Yeah, I saw the 'plan', but it also says for construction in the actual budget document. I'm not really surprised. There are a number of things announced in budget that don't even have dollar figures attached. The 50th Street rail crossing for example.

The location of the new facility will be near Ellerslie Road and 127 Street, which is close to Anthony Henday Drive and the QEII.

Premier Rachel Notley will be on hand to discuss initial plans for the new health-care facility.

Health Minister Sarah Hoffman and Infrastructure Minister Brian Mason will also be at the announcement.
Click to expand...

Notley noted that a new hospital hasn’t been built in Edmonton for roughly 30 years.

“The benefits of this project will be felt right across the capital region and our entire economy …While some say now is not the time to make these kinds of investments in the health of Alberta families, I disagree,” Notley said at the announcement in the Heritage Valley area.

The $400 million is for the planning and development of the hospital, with additional funds to come when construction starts.
Click to expand...

Notley, Health Minister Sarah Hoffman and Infrastructure Minister Brian Mason announced details of the new hospital in a Tuesday morning news conference from the new facility's confirmed location on a parcel of Crown land near Ellerslie Road and 127th Street.

The hospital is intended to ease pressure on Edmonton's aging Misericordia Hospital and serve the city's rapidly expanding southwest neighbourhoods.

The 320-acre site was chosen because it can accommodate a health campus, has easy access to Anthony Henday Drive and the Queen Elizabeth II Highway, said Mason. LRT planning includes expansion to the site before 2040.
Click to expand...

Wait time for new Edmonton hospital will be nearly a decade, province says
Edmontonians awaiting a “desperately needed” new hospital in the city’s southwest will have to stay patient for nearly a decade before the new facility opens its doors, provincial leaders said Tuesday.

The massive, complex project requires three years of planning and development work before ground can even be broken in late 2020, followed by six years of construction time, the leaders said.

That means the hospital will begin treating its first patients sometime in 2026, provided there are no major delays.

“And you can take that to the bank.”

The timeline raises questions as to how well the city’s overburdened hospitals can survive another decade before the new facility opens.

However, the health authority said Tuesday those forecasts have now been revised downward, in part because estimates of the region’s population growth have been lowered.

As well, AHS CEO Verna Yiu noted the health system is in the midst of a transformation to reduce hospital use by treating more people at home or in community settings.
Click to expand...

Somehow I see this being an election issue.

Hospital construction is expected to begin next year and open to the public in 2030.
Click to expand... 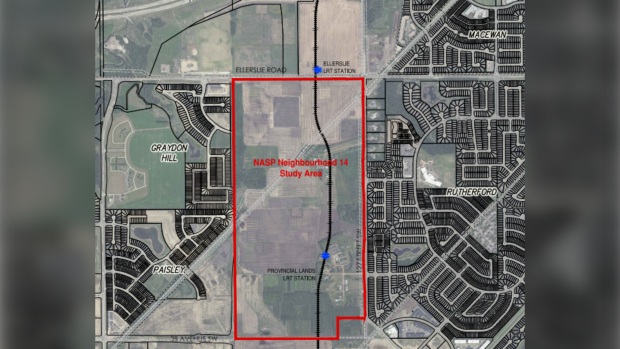 City council has approved a plan to build a new neighbourhood in southwest Edmonton that will include a hospital and an LRT station.
edmonton.ctvnews.ca
SkyriseEdmonton | Daveography.ca | Flickr | Facebook | yeg.bike (Mastodon)

City council has approved a plan to build a new neighbourhood in southwest Edmonton that will include a hospital and an LRT station.
edmonton.ctvnews.ca
Click to expand...

9 years to build and open hospital?!?
We can certainly do better than that can't we?

Grandinite said:
9 years to build and open hospital?!?
We can certainly do better than that can't we?
Click to expand...

if you want my best guess, 9 years is probably optimistic even putting aside it's going to be built in the middle of what is now just a field with no actual site and no infrastructure in place. even if there is some high level functional planning in place for the actual facility, detailed programming is likely to take up to 2 years, construction drawings another 2, construction at least 4 plus a year for fixturing and commissioning. 9 years isn't a particularly long time frame for something as complex and intricate as a hospital and even that assumes there will be no political or bureaucratic interference. the grande prairie hospital commitment was announced in july of 2007, construction started in 2011 and if things go well it start to treat patients in 2021 (although the law suits are likely to take another decade after that to be resolved).

Grandinite said:
9 years to build and open hospital?!?
We can certainly do better than that can't we?
Click to expand...