This project is dead as it is.

A construction site in the downtown Quarters redevelopment will remain a giant hole in the ground for now after plans to build the first of two condo towers fell through.

“The developer’s not proceeding. There were conditions that aren’t met, so the city has taken possession of the site back.”

A 28-storey residential tower called the Corners with 285 units was slated to be erected at the location, which Debrinski said was contaminated, although she didn’t know what caused the problem.

Under an arrangement reached in 2013, BCM had to clean up the property before starting construction. Debrinski said that work was completed, with contractors digging down 10 metres to remove all the polluted material.

She doesn’t know why the company didn’t buy the land as planned. Company officials couldn’t be reached for comment.
Click to expand...

Sad to hear, though I'd rather take a literal hole in the ground over an at-grade parking lot. At least that gives off the impression that there's progress!

I've marked the project as on-hold for now - we don't have a 'cancelled' designation (at least not yet).
Flickr​

Developer says condo victim of delays
The developer of the now-cancelled Corners towers project says plans fell victim to disagreements with the city over land expropriated for the Valley Line LRT as well as issues obtaining permits.

Claudio Raimondi of Edmonton-based BCM Homes told Metro in an email that land was “expropriation for LRT purposes of the sister tower, on the southwest corner” of the intersection in The Quarters where the building was to be built, and that caused logistical issues and delays.
Click to expand...

BCM homes was going to build a 28 storey condo project there, then backed away from the deal last year. because of changes in the market. So now the city has the listing active, following what we reported in December where a couple of parties had shown interest.

Coun. Scott McKeen said he suspects nothing has changed that way, the city is simply “doing its due diligence.”

The land is zoned for a mix of commercial and residential use, and the listing suggests city and provincial grants can likely be had for putting affordable housing on the market.
Click to expand...

There's high hopes for the giant hole off Edmonton's Jasper Avenue
City staff say three developers have submitted competing bids to buy the property at Jasper Avenue and 96 Street, left with a giant hole after contractors dug out contamination 10 metres down then walked away from the condo project.

The lot on Edmonton’s main downtown corridor has sat untouched since at least last fall, when BCM Developments couldn’t get financing and geotechnical assessments finalized before the city’s deadline. Edmonton had paid the cost to decontaminate the site and had a construction deadline in its sale agreement with the developer because city planners want a tower to spur redevelopment throughout the east downtown district.

When BCM Developments pulled out, it was considered a major setback. But the clean site and other improvements to the sewer system in The Quarters area have many more developers interested.

“We’re pretty happy with the turnout for the listing,” city land sales director Chris Hodgson said ofthe listing that closed March 23. “We had a couple parties that called” after the listing closed to express interest if none of the current proposals turns out. It’s definitely a more desirable site now.”
Click to expand...

Wonder when we will hear more? Hopefully this is started and finished by the time the Valley Line is open.

The city put the “Five Corners” site on Jasper Avenue and 95 Street earlier this year with bids closing in late March for interested parties at a suggested price of $4.375 million.

A proposed condominium tower had been planned for the site, but after excavating for the base of the tower the builder walked away.

City spokesperson Jodi Tauber said they received three proposals and are evaluating them now. The city is eager to see development on the site and Tauber said they hope to select winning bidder as soon as possible.
Click to expand...

Not sure, but I believe there are some new items down in the pit? This was taken last week. 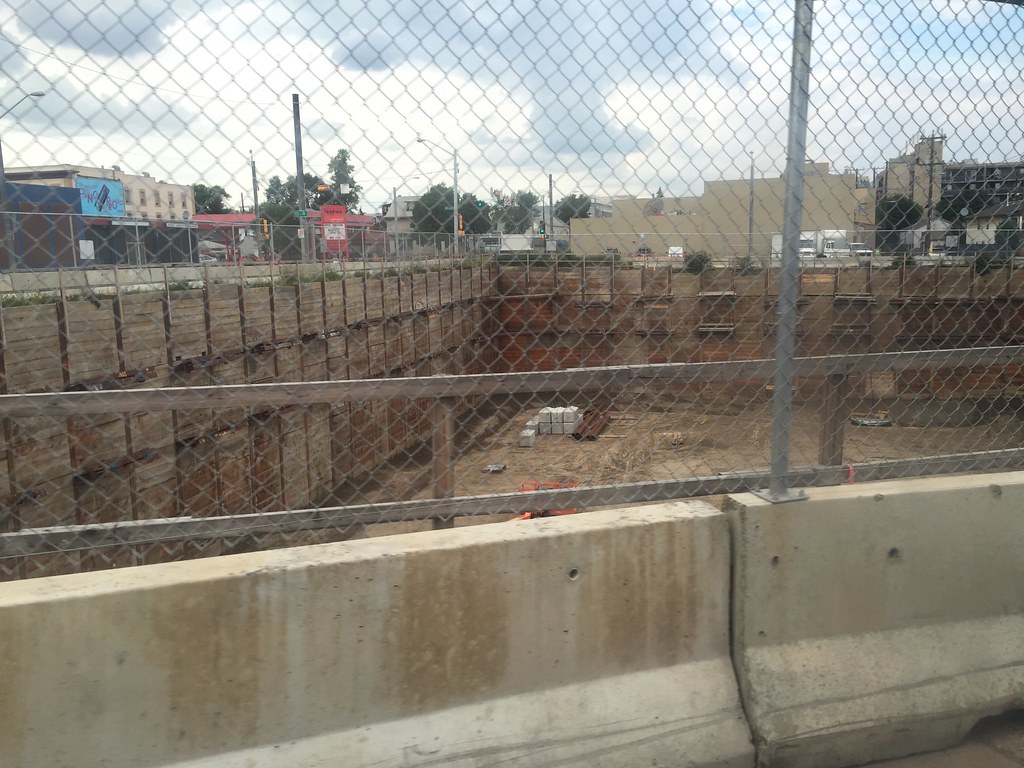 Oh? I thought Cidex purchased it already? Or is that not a done deal?