BASE said:
Fair enough. Not sure how often the cars would need to be moved but thought it could be a temp solution to get the line going while the line is delayed indefinitely. Alternatively perhaps a temporary spot could be set up for light maintenance/cleaning. Maybe not realistic.
Click to expand...

With the amount of random stuff that keeps popping up that they are fixing it makes me have doubts the line is even capable of running. As @EdwardEdm mentioned - why is the power off to the OMF leads? Why is the power off in Millwoods? There hasn't been any work along the line in either location that I've noticed.

Also how effective would it be for riders to have to transfer from bus to train/train to bus? I think you're just going to anger the ridership making them transfer vs just running the replacement bus service until/if the thing is ready to fully operate.
D

They could use the west OMF to run trains to Avonmore when it opens in 2027.

awstott said:
Moving anything by crane is horribly expensive. Transed doesn't have a crane in their fleet that I've seen. Any time they've had to do anything that was a large lift they had a contracted crane come in. For example unloading the rail milling machine.

Caught this being unloaded and assembled near the Valley Line OMF this afternoon. This is a milling machine the profile the track. Hopefully I can get a shot of it in action another time. - AWS_4802.jpg

Also, love the website. It's so up my alley looking at all the rail pics... lol
"Our neighbours to the south sent humans to the moon, believe it or not, a couple of decades ago. And we're still trying to figure out how to build bridges" - Edmonton Mayoral Candidate, 2017
E

BASE said:
I assume they have a mobile crane they use to remove cars from the track in the event they get stuck. This could be put into service to take cars over to the maintenance yard.
Click to expand...

That's never been a thing. They have a diesel powered powered Trackmobile for moving cars, and even then that is likely a last resort. The first choice would be use another LRV to tow a dead LRV. You don't bring out the Trackmobile until you need to move LRV's with no catenary power available. Testing was done last summer to ensure an LRV would be able to tow a disable car cup the steepest grades.
Metrolinx moved a few cars to an completed section of one of their lines under construction by truck. I believe they used a trailer and just winched the cars on and off. Pretty standard practice, no cranes needed. The same could be done here, after all, that's how the cars were moved from the freight car they were delivered on to CN's Bissell yard, to the Gerry Wright facility, and even then to the Boonie Doon and Mill Woods Town Centre when the cars were put on display.

While it is viable if the needed arises for testing, it's really not viable for day to day operations when there's already a functioning bus route.
E

awstott said:
With the amount of random stuff that keeps popping up that they are fixing it makes me have doubts the line is even capable of running. As @EdwardEdm mentioned - why is the power off to the OMF leads? Why is the power off in Millwoods? There hasn't been any work along the line in either location that I've noticed.
Click to expand...

All of Mill Wood's (south of Whitemud) is energized again. Although the Grey Nuns Station, SB platform, has no lights inside the shelters at night. Either they've been turned off, or, something's broken. Still not energized for at Gerry Wright OMF so no trains able to come onto the mainline without being towed.
T

Based on this article (train vibrations), I wonder if springs could be added to the piers to buffer the vibration of the trains, something like next door to Winspear: https://www.cbc.ca/news/canada/edmonton/edmonton-city-council-transed-valley-line-lrt-1.6549116
O

The_Cat said:
Based on this article (train vibrations), I wonder if springs could be added to the piers to buffer the vibration of the trains, something like next door to Winspear: https://www.cbc.ca/news/canada/edmonton/edmonton-city-council-transed-valley-line-lrt-1.6549116
Click to expand...

From that article:
Korany says the vibration of trains running on the tracks will also be a factor in determining what fixes are needed.

"You have vibration, you have curved railing, certainly trains running back and forth on the line all day long for 365 days a year for how many years," Korany said.

"If you have micro cracks that we currently don't see on those other piers, compounded with the effect of vibrations from the train movement, that could be exacerbated."


How on earth is this so complex? I mean, the entire point of the piers was to support train tracks. That's why they were built. Mind boggling.

Many elevated tracks have seismic pads for this reason (and the original obvious one).
D

Maybe they can learn something from this 25+m pit they've excavated around existing Skytrain columns (and station in the background) in Burnaby. 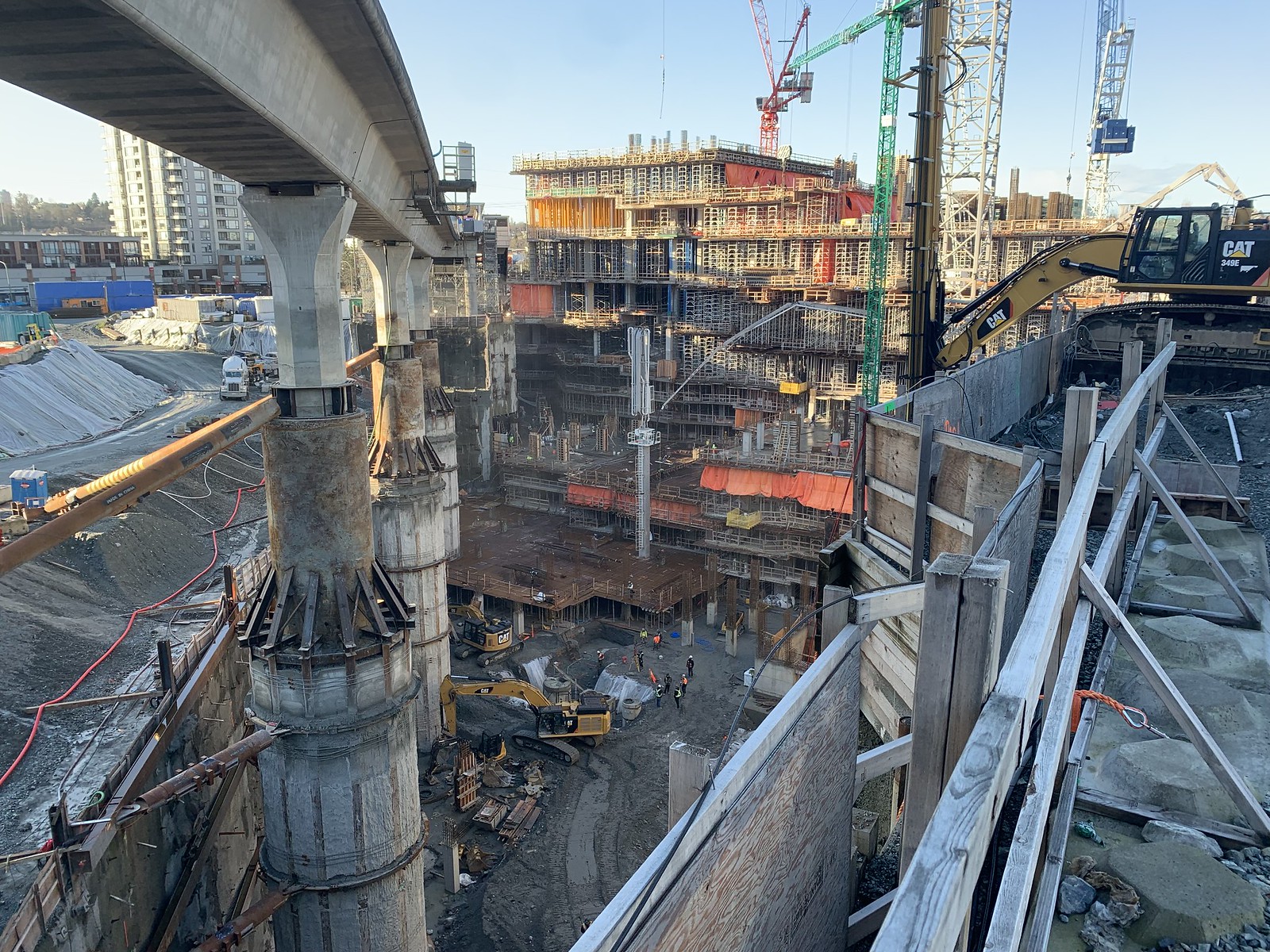 I used to work beside that site and have been following this project and its incredible site staging for a few years now; it really goes to show what can be done if you have the desire to do something more with a very challenging site.
A

So power is off in Millwoods again this afternoon - Western Pacific trucks parked on both tracks at MWTC, one with a big spool of cable. Signal post across the from the firehall has a pile of wires hanging out the access hole at the base of the pole with another Western Pacific truck there. Why are we still pulling wires for the signaling system almost a month after the thing was supposed to be open?

What else isn't done that they are hiding behind the pier issue - seems to be a repeat of their constant blaming the concrete in the river for delays.
D

dkazzed said:
Maybe they can learn something from this 25+m pit they've excavated around existing Skytrain columns (and station in the background) in Burnaby.

Maybe the competent people were working on this instead of here - that would explain a lot.
T

I wonder how much concrete is being poured, and has been poured elsewhere:

Seriously... this is a bit alarming considering how many areas are requiring replacement.
T