109-year-old Transit Hotel in Edmonton to close its doors
A hotel that’s been part of Edmonton’s fabric since 1908 will close at the end of June.

“I was kind of shocked that it was going to happen that quick,” customer Bucky Russell said. “We’re going to miss it in the area because there are a lot of steadies around here.”

The Transit Hotel on Fort Road and 127 Avenue opened on Sept. 11, 1908 and was the only beer parlour along the Fort Trail to Fort Saskatchewan.

When it first opened, the Transit Hotel boasted 40 rooms, with many modern conveniences like bathrooms on the top two floors.

Patrick Dwyer built the hotel for $50,000 and, despite the hitching posts being taken down and some renovations, it kept close to its original look for over a century.

On Wednesday, a Transit Hotel employee confirmed the business would close June 30.
Click to expand...

Transit Hotel closing its doors after 109 years
Above the bar at the Transit Hotel sits a note that says it will be closing by the end of the month for economic reasons.

In the corner sit regulars in their 60s who reminisce about the bar's good old days.

The smell of old beer is a reminder that the bar has been here for a while and hasn't changed much.

And that's why the regulars keep showing up. The problem is there aren't many of them left alive.

"I remember a lot of the old-timers, they used to be my customers when I was slinging beer in here."
Click to expand...

This one should definitely have irreversible historical designation. Too many of these kinds of structures have been lost in Edmonton's past!

Paula Simons: Last call for the Transit Hotel, Fort Road's Wild West saloon
On a warm Wednesday morning, the regulars are gathering at the Transit Hotel to swap stories, commiserate and drink a few beers.

After almost 109 years in business, the iconic Fort Road hotel is closing its doors at the end of the month. Staff received the news late Tuesday afternoon. So did the dozen or so tenants who live in the rooms upstairs.

The Transit is an authentic Edmonton landmark with its signature facade like a set piece from a Hollywood Western.

Transit Hotel staff, patrons and residents learned on Tuesday, June 6, 2017 that the building would be closing at the end of June. GREG SOUTHAM / POSTMEDIA

Patrick Dwyer opened the 40-room hotel on Sept. 11, 1908. Back then, this was Fort Trail, the gravel road to Fort Saskatchewan. The Transit served travellers to and from the Fort, who hitched their horses to the hitching posts outside the front veranda.

The Edmonton Bulletin was loud in its praise of Dwyer’s “commodious new hostelry.”

“The hotel will be lighted by electricity and will be supplied with hot and cold water. A telephone call system has been installed and in a few days the proprietors expect to have a barber shop open in the basement.”

The Transit Hotel opened in 1908, on what was then Fort Trail. Back then, this part of Edmonton was known as Packingtown, because of its concentration of stockyards and packing plants. An undated photo from the Provincial Archives of Alberta. PROVINCIAL ARCHIVES OF ALBERTA / EDMONTON
Click to expand...

We are absolutely thrilled to announce that, following renovations, we will be reopening the doors to one of Edmonton’s most historically significant buildings very soon, the Transit Hotel!

Please follow us for regular updates and upcoming news on our development, as well as the reopening date!
Click to expand... 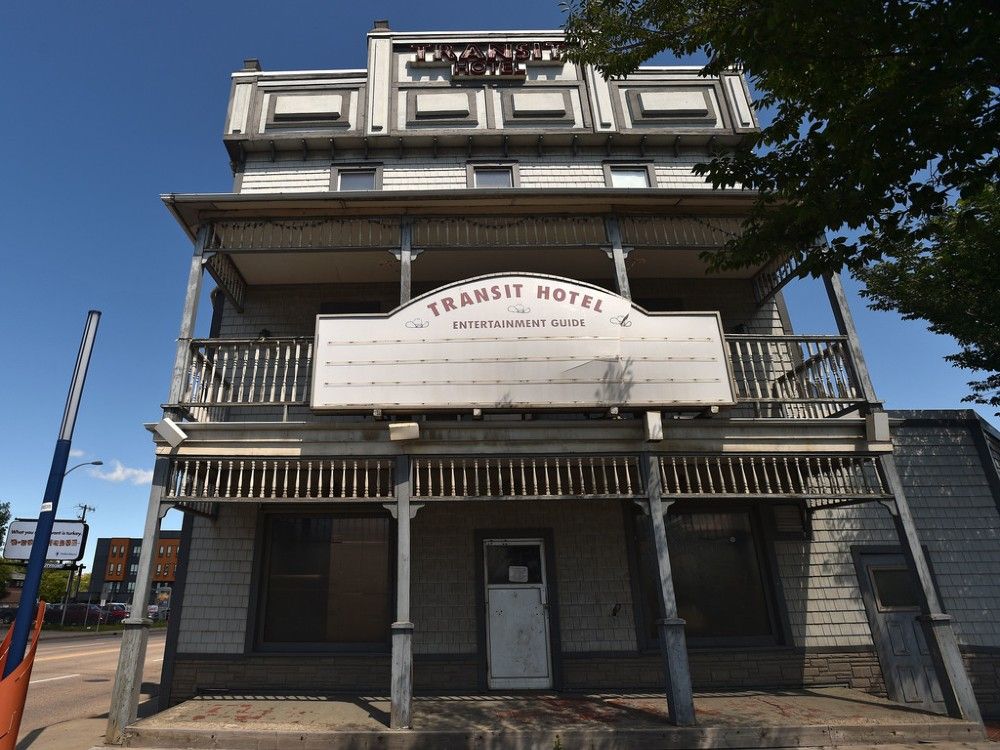 After renovations, the historic Transit Hotel in Edmonton will be reopening its doors "very soon," one of two business partners behind its revitalization said Saturday.

Hey everyone! First time posting here after stalking the forums for quite a while. Just thought I would share the most recent progress of the old Transit Hotel renovations after coming across this photo on Reddit.

Original Post:
https://www.reddit.com/r/Edmonton/comments/kiczxd
TransitEdmonton also has a full video update/tour of the interior posted if anyone is interested:

If we have a thread for the Transit, I may as well share this for those interested:

Daveography said:
Welcome to the Forum @JayYEG!
Click to expand...

Thanks, Dave! It's great to be part of such an amazing community!

I bought some merch from the restaurant (they're using merch sales as a post-gofundme fundraiser). The guy who I talked with on Facebook will take me in for a sneak peek when I pick up the items tomorrow. I'll be sure to take some pictures for you all! If you have any questions you want me to ask, let me know. Although, they're super active on Facebook and have answered all of my questions very promptly, so there's no need to go through me either.
“A society grows great when old people plant trees in whose shade they know they shall never sit”

Here are my pictures of the restaurant, with captions below each picture! The captions contain a mix of info about what the pictures show, and context about the wider project. I also have more info at the bottom of this post.

First, here is the website for the Transit Smokehouse and BBQ restaurant: https://transitsmokehousebbq.com/

Facing away from the main entrance; the bar is to the right in this shot. Some of the chairs were taken from a local restaurant which closed due to the pandemic, while some others are originals which were re-upholstered.

Taking from the corner of the bar; the main entrance is to the left (out of the frame). The wood floor is all original and just refinished (at least, original from the last time it was re-done, but these guys were happy with the condition of the wood floor and did not replace it).

The wagon/cart wheels will be hung on the wall (I think); they were found in the basement cellar.

The private conference room, where the VLTs used to be (they're thankfully gone). To the right are new glass window panes which will replace the graffiti-covered fibreglass panes. They might bring fibeglass back later on; glass is easier to clean graffiti off of compared to fibreglass, but it is also easier to break.

The corner of the bar, with an espresso machine on the counter.

The other part of the bar. The wooden shelves will be used as a wine rack.

Another shot of the wine rack, and the room where the cooler is. The cooler had to be completely re-done, because it was lined with wood, but modern health and safety regulations prohibit food from being stored in coolers that have porous surfaces. Liquor will be supplied by the Transit Liquor Store next door.

The ramp leading from the main dining area to the kitchen.

The French oven, with employee uniforms on the counter. They've already hired staff, who started working a few days ago.

Part of the kitchen, with some smokers on the left and a window facing Fort Road on the right. The window is covered by a sliding metal guard which was previously there. They've applied for a permit to use the smaller as an "outdoor" smoker which would be placed in a small vestibule. It'd technically be inside, but they're hoping it would be ok. This would allow them to open the restaurant for takeout starting December 30th even while work continues on ventilation for the main smoker, which will take a couple of weeks yet.

Another shot of the kitchen, facing the dish pit.

\
Another shot of the windows facing Fort Road.

The reason why they could not open up the ceiling as many people said they should: The ceiling is in rough shape, there is a lot of wiring which would have to be tidied up, and as with any old buildings, there could be asbestos. For now, they spent a couple grand on 100 gallons of paint for the ceiling tiles, and repairing the roof is on their "to do" list for after they've made a steady profit and proved that their business model works.

Aside from a new door, they also want to have a mural put on the exterior of the building. I think the guy I spoke with mentioned they're currently talking with a local artist? I could have misremembered this though. Also, it's important for this project to succeed, because it will impact the long-term outlook for the Transit itself. The two folks currently investing their own time and money into the restaurant (and eventually the hotel as well) are just tenants. Although these two want the building to be given historical status for protection and preservation, the owner does not because it would prevent him from selling it off for redevelopment. He obviously does not want to pay for the upkeep of an empty building. If the restaurant succeeds, then he'll probably be more friendly to the idea. Plus, if it has status, the city will cover up to half the costs of renovating the building so that it can be kept historically accurate.
Last edited: Dec 24, 2020
“A society grows great when old people plant trees in whose shade they know they shall never sit”

Thank you, it's my pleasure
“A society grows great when old people plant trees in whose shade they know they shall never sit”