A new interchange at Queen Elizabeth II (QEII) Highway and 65 Avenue in Leduc will support more than 470 construction jobs and improve access to key cargo hubs. 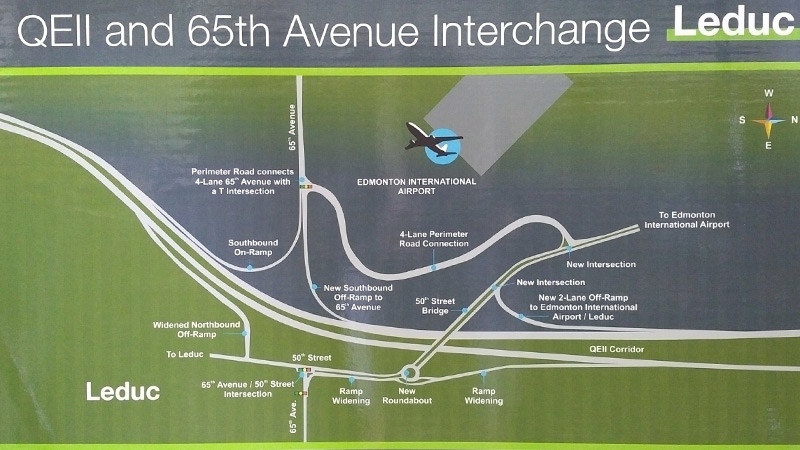 124st upgrading has started this morning. There is not a route I take into town that does not have construction on it right now. Back onto my bike next week.

Hopefully this will encourage some investment north of 111ave.

That will allow better access for the Air Ambulances as well.
The southbound on ramp looks to be right where the truck pull over is.
Does look like the free flow south onto 50th street is gone though.

I know they aren’t everyone’s favourite, but I’m wondering when the City will finally get off their hands and issue licenses to the e-scooter companies (Lime, Spin, Bird, etc)?

They said mid May, it’s now days till June. How do they expect any chance of the e-scooter rental business model to survive in Edmonton if they chop off 1/4 of their seasonal revenue opportunity?

Last year they were out in March and they only get 6-7 months to really make it work.
Bet the best when you know you got 'em.

Like calgarys that operates year round and has ebikes…

thommyjo said:
My guess is this will really help our chances of getting a bike share too…

LITERALLY!!!
Bet the best when you know you got 'em.

went by the 124st rehab this morning. Northbound from 111ave to 118 is now closed. New sanitary and storm lines are going in. The road bed is being completely dug up. about 1-2 meters down. Into the clay layer. Lots of railway ties being excavated as well.

CplKlinger said:
Fort Saskatchewan is getting a street redone downtown, and it'll include a pretty significant sidewalk expansion.

The new design, which will be constructed this year, widens the sidewalks by 3m (on the east half) and 1.5/1.7m (on the west half, nearest to the green apartment building). On top of that, they're also putting in rows of trees that separate pedestrians and vehicle traffic, like we already see along 100 Ave downtown.

So, the sidewalk should look something like this (but not as fancy, and a bit narrower in parts).
View attachment 392370
Click to expand...

A stretch of 104 St will be getting similar treatment as well. During the road rehabilitation project this summer, the city is putting in a bike path on the north side, accompanied by a 1.5m sidewalk. On the south side, the existing sidewalk will be replaced. The bike path will be isolated from other bike infrastructure to start with, but hopefully the city will continue to add more paths like this during future rehab projects in the area.

That's not to say it'll be completely isolated though. 100th Ave, Fort Saskatchewan's main downtown thoroughfare, is pictured in the post I quoted. The wide sidewalks and slow traffic (it was designed to keep vehicles moving at a slow pace) make cycling better than in many other commercial areas of the city, although still not ideal. In contrast, 104st and the other streets which connect to 100 Ave are characterized by very narrow sidewalks and wide roads.

It'll be nice to have this improved pedestrian connection to downtown, so that 100th Ave is no longer an island surrounded by typical vehicle-oriented stroad design.

^This rendering omits the north-side sidewalk for some reason ^Just for kicks, here's the legend in case you care. Airboy said:
Tree removal has begun for the Latta Bridge reconstruction. It appears the construction will begin sometime in the late summer.
Click to expand...

Construction on the Latta Bridge is scheduled to begin in August 2022 and is anticipated to be completed by fall 2023. Latta Bridge will undergo a complete closure as is necessary for the demolition of the existing structure.

Detour routes for pedestrians, cyclists, motorists and transit will be shared closer to the construction date. He's always so spot on

Land Use Planning + Transit Planning, good or bad, are what come together to make a functional city. Neglecting one in any plan will ultimately lead to failed goals and wasted resources, at least until a change happens.
Cities are evolving organisms, growing and shrinking in different places, and transport networks are the arteries and veins of it. Cities are artworks of culture and human interaction that tell a compelling story of everyday life, a little chaotic and messy at certain moments but still a piece of art nonetheless. I want to be a character living and breathing within that art.