awstott said:
That reddit thread has a few people that have worked on the project chiming in. Seems like quite the dumpster fire. We've seen some of it in person down here in Millwoods, but WOW!
Click to expand...

It's an incredibly complex project that faced multiple hurdles and is highly visible, but man what a mess.

Yep. This has to be what, top 3 most complex construction projects ever commenced in the history of the City of Edmonton? Only more complex ones I can think of are the Henday and the Capital Line (if you count either as one consecutive construction project).

Doesn't excuse any of these boneheaded mistakes but just some food for thought.
"Our neighbours to the south sent humans to the moon, believe it or not, a couple of decades ago. And we're still trying to figure out how to build bridges" - Edmonton Mayoral Candidate, 2017
A

I don't think I'd be so hard on them if they were actual truthful about the delays. I live 4 blocks from the line and have watched the stuff they constantly screwed up, yet the concrete in the river was always the cause of the delay. If they didn't have the concrete in the river and the bridge was actually finished on time they still wouldn't have been able to open the line. Let's have some transparency - share the project plan and the deliverable dates, especially when things are so far behind. It would help managed the expectations of everyone, and you wouldn't have so many people pissed off at you.

Waiting for the announcement for the 66 street north and southbound reduced to a single lane due to enhanced sidewalk replacement - I swear the middle of that intersection drops at least 6 inches where as it should probably be crowned that much.

Wow, I just thought about something. Considering how much trouble TransEd is having with all the piers, we actually dodged a bullet by not getting an elevated station and section around Bonnie Doon.
O

It's kind of interesting how massive the elevated track is compared to the relatively tiny support pier...I wonder if they were undersized?

Or is the guideway oversized?

whatchyyc said:
Or is the guideway oversized?

dkazzed said:
The viaduct is so wide, I measured about 12.5 to 13m on Google Maps. How can something be so overengineered and underengineered at the same time? The side barriers are so high.

The existing Dudley B Menzies Bridge and Calgary's elevated section have 11m wide viaducts. Vancouver's Skytrain is 8m wide with the double tracks for Expo/Millennium Lines, 9m wide double tracks for the Canada Line which has 3m wide trains, but they don't have catenary supports and the required clearances to deal with. Triple track sections on Expo/Millennium Line are 12m wide.
Click to expand...

No idea why they didn't just copy Calgary's bridge. It's basically a proven skytrain design in a cold weather climate, why come up with this overbuilt behemoth
D

Maybe someone really wants to keep the concrete companies in business!
T

The cynic in me believes that there will be trespassing on the tracks and bridges, and the extra width allows for better safety.

The_Cat said:
The cynic in me believes that there will be trespassing on the tracks and bridges, and the extra width allows for better safety.
Click to expand...

i would also wonder if the extra width is to allow for the evacuation of a stranded train in less time that could be managed on a narrower track, something which is a bigger issue in our climate than it is in the lower mainland.

Maybe, but Calgary is already 3m of room between the two tracks vs 3.5 on VL. A much chunkier guideway just for .5m extra? 2m is plenty for evacuations. 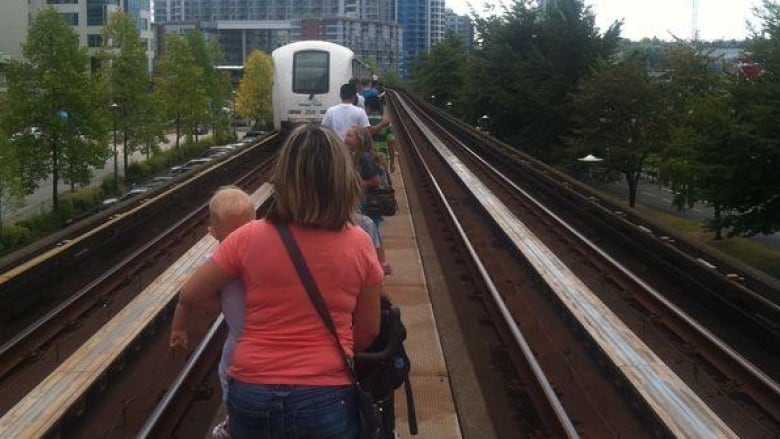 The latest on the piers: https://edmonton.ctvnews.ca/video?b...XIALg3-5ZLS-d0LuNZzakmCU6xNCblrGOWqa-FEJTAVeg