What should the future hold for this building?

Maybe it should just be demolished to avenge the loss of the Tegler which it replaced?

Throw out some ideas, as realistic or as visionary as you please.

Can a re-zone be applied for without a specific concept in mind?

archited said:
Can a re-zone be applied for without a specific concept in mind?
Click to expand...

@Daveography -- thanks for the info. Down here in SoCal we are putting a contest together for 3 totally avant-garde high-tech houses completely outfitted with appliances (small and modular), furniture, and bonus features (Tesla electric SUV and small electric utility vehicle). The gist of this is that we will have a 54-episode TV special (3 times per week X 18 segments). Homes under the heading 'Snapz'; TV show under the heading 'EcoTechNow Living Spaces'. With this we are ramping up employment for production including both live shots and animation. We are looking ultimately to build a 500+ employee company with a permanent presence in the film industry. I am considering developing this company in Edmonton where some of our Cedar Waxwing members are located. Maybe you have the ability to get the word out. Initially, we are looking for videographers that can shoot live and, also, for a specialized holographic format. We are also looking for animation techs. Our pay scale will be above average with mid-to-long-term employment contracts. Employees will need passports to travel U.S destinations, U.K and Europe and, incidentally, across Canada. You may be able to help; maybe not.

@Daveography, we should connect off-line. You can email me @ tedp@gotsky.com and I can send additional details. 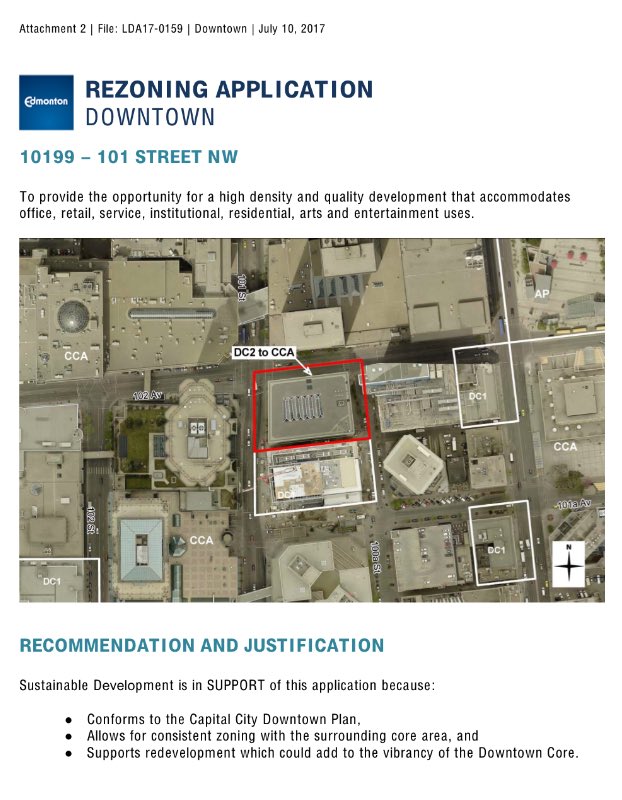 Though we have this thread already, the demo permit is in which means something new is going to happen here. I'm dying to know more, but my relationship with Regency is...strained at the moment. The old BMO building (left) is now vacant. The BMO main branch is now in the Enbridge Building, right next door. ED KAISER /POSTMEDIA
Since 1984, the striking Bank of Montreal building on Rice-Howard Way has been a downtown Edmonton landmark.

With its huge walls of glass windows, the granite-clad six-storey building stood out from the highrises around it. If you were walking by, you could see right in. And if you were inside the BMO, with its high-vaulted ceiling and its natural daylight, you didn’t feel as though you were in some dark, stuffy old bank.

The permit hasn’t been granted yet. But the city planning office says there’s no reason to turn down the application.

It’s quite a come down — literally — for a building that was meant, back in 1984, to be a symbol of downtown Edmonton’s modernity and renewal.

The BMO itself hasn’t gone far. It’s moved next door into new digs on the first two floors of the Enbridge Building.

BMO branch manager Gladys Balcarce says their Enbridge space, which has its grand opening Nov. 16, has allowed them to consolidate retail banking services in a “state-of-the-art” building.

But while it’s great to see a solid main floor tenant for the Enbridge Tower, the bank’s move left its old glass box without a purpose.

Back in April, the site — four city lots, valued by the city for tax purposes at $17.1 million — was sold to new owners: Rakesh and Raj Dhunna, the father-son team who run Regency Developments.

The Dhunnas are best-known for their ambitious super-highrise developments, including the 36-storey Pearl at 119 Street and Jasper Avenue, and the 45-storey Emerald, planned for Jasper and 114 Street.

Raj Dhunna says the company has plenty of projects on the go. But when the bank site became available, they didn’t want to miss the chance to snap up a premier property.

“We went into it without a real vision. We just knew it was a great parcel, a great corner in our city.”

Their original plan was to find tenants, lease the space out for the next five years, and wait for the current glut of downtown office space to be absorbed. But Regency applied for a demolition permit earlier than planned, he says, because the Valley Line LRT is planned to run right past the property, and they want to be sure they can demolish the bank building before LRT construction begins in earnest.

“We could just hold the site. Or we could do it Regency-style, and be aggressive.”
Click to expand...

Aggressive in this case, he says, might be a tower 40 or 45 storeys tall, with a mix of retail, office space, hotel and condominiums.
Click to expand...

Why is it strained?

Developer seeks approval to demolish former BMO building in downtown Edmonton
About 35 years after the historic Tegler Building was demolished in downtown Edmonton, a developer wants to do the same to the building that replaced it in order to build a 40- to 45-storey high-rise tower.

Earlier this fall, BMO (Bank of Montreal) moved from its location at 102 Avenue and 101 Street to the Enbridge Building next door. According to the building’s new owners, Regency Developments, it would be difficult to find a new tenant for the current building, partly because of its lack of dedicated underground parking and also because of how big it is.

“The sheer size of it and scale of it, it’s a pretty specific tenant that would have been able to take this over, ” Regency Developments’ Raj Dhunna said on Monday. “When we first purchased it, it wasn’t a clear vision of what we wanted to do. We just knew it was a prime corner so I would say not to worry about it being an empty lot too long.”

“Our timeline is basically between now and spring,” Dhunna said. “I think it would be very difficult for the demo of this building to happen in conjunction with the road closures and everything.”
Click to expand...