Read an article today about JW Marriott topping off and in the article contained some information about Phase 2. Construction could start 2 or 3 years after the land is rezoned and serviced. Also an office tower is being considered for the Baccarat Casino site however it won't go forward unless market conditions are right.

Phase 2 has a lot of potential. I thought initially that where the Baccarat is located was to be a "trophy tower" and thought that was supposed to be part of phase 1?
"What we do in life echoes in eternity."

I think everything got pushed back with the recent recession, sadly. Hopefully with the economy picking up again now we'll start to see more movement on projects like these.
SkyriseEdmonton | Daveography.ca | Flickr | Facebook | yeg.bike (Mastodon)

Hmmm, this one seems to be getting closer! Cities are evolving organisms, growing and shrinking in different places, and transport networks are the arteries and veins of it. Cities are artworks of culture and human interaction that tell a compelling story of everyday life, a little chaotic and messy at certain moments but still a piece of art nonetheless. I want to be a character living and breathing within that art. 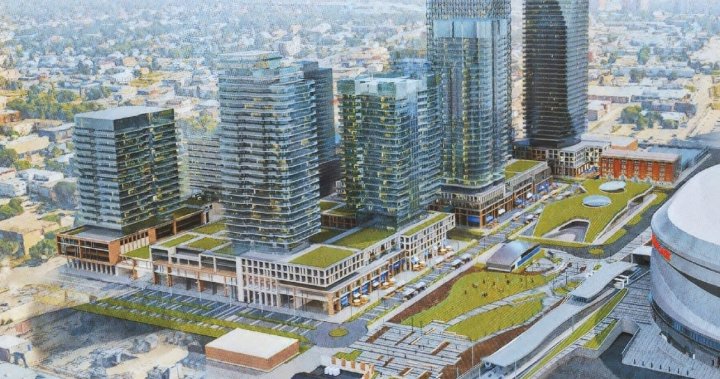 Ice District Phase 2 would involve 12 towers: three on the site of the old Baccarat Casino and nine in the area between 105 and 106 Avenues and 101 and 105 Streets.

Talk, talk, talk... doesn't anyone build anymore? I think the Ice District is trying in its own way to put the "freeze" on adjacent projects by other developers by indicating that they alone are going to gobble up Edmonton's core development demand. Miffed about parking? Maybe. But they are in the catbird seat. If they began phase 2 development, they could enable construction parking and assembly trailers siting without impacting their own event-parking-existing-underground-structures. The demand for additional condos is clearly there; also office demand is on the increase; maybe even a second hotel (under the Marriott banner?). This is not rocket science -- they should take advantage of the momentum that they themselves created. As for tower B and associated hospitality/retail, let's not create an eyesore that lessens the impact of the potential City Centre that they have control over -- this as much as any other in the City should be a legacy project; it should be an architectural masterpiece with impeccable planning attributes. From a public perspective, the centre is less than half finished and there should be an urgency that belies a stalemated effort. If the Ice District wants to score, they should show a little offense.

We need a greenbelt and/or agricultural reserve to put the brakes on outward development. We easily have enough vacant and underutilized land to support another 50 years of growth in existing brownfield, but development will always stall as long as it competes with artificially cheap land on the outskirts.
SkyriseEdmonton | Daveography.ca | Flickr | Facebook | yeg.bike (Mastodon)

we once had a green belt but then it became the TUC for the Henday. I recall that during annexation talk, the GoA determined there was to be a green space between St Albert and Edmonton. Basically from 137ave to St Albert's south boundaries. At the time Jasper Auto parts was located on the south side.

This is brilliant. When will someone present this to city council as a solution to Edmonton's own sprawl problem?

And so what if single-family developers take their business to bedroom communities, or to other cities entirely? We need to look out for our #1, our Edmonton. We need to fill our surface lots, brownfields, and TOD proposals, all sooner rather than later.

Does anybody know if Tower BG and the Baccarat site are now considered part of Phase 2, or will they become Phase 2 and the Phase Formerly Known As Two will become Phase 3?
Perhaps we'll know more after April 7.

^ Your guess @.crystalised. is as good as any. I think the Katz group lost their way. If they could exhibit a tad more creativity, then I suspect they would have an easier time attracting businesses to their schemes. The arena is beautiful, the hotel/condo is beautiful -- the rest is so-so; I have a feeling they are headed in the wrong direction. They are probably listening to ill advice from realtors instead of focusing on the creative aspect. I guess we'll know soon enough.
You must log in or register to post here.
Share:
Facebook Twitter Reddit Pinterest Tumblr WhatsApp Email Share Link