What an awful looking building. In my opinion it would ruin the look of a sleek and modern looking Ice District.

142m is the highest it can go due to the soil conditions the foundations were built on.

That soil conditions argument is a ruse -- and an excuse to water down the proposal and feed the naive public a line of BS. I still think that the main sticking point is getting the City to opt into a public park for which they would have to contribute substantial dollars. If I were a decision maker at the City, I would let them (Ice District et al) stew in their own fabricated sauce. I am pretty sure that Katz is not going to build a piece of crap on this site, but he is under no pressure to move quickly -- the mistake that he is relying on is that the City doesn't move quickly on anything. It is cheaper for Katz to come up with alternative after alternative in this game of "who moved my cheese?", holding out for a City contribution. In the long run, it only hurts his vision of the Ice District. Expect to see a new finalized rendering from a more substantial architectural entity some time later this year when the game-playing ends... leading to a new set of construction documents and a start later in 2020 or later.

@archited Not a ruse at all, it's well documented: 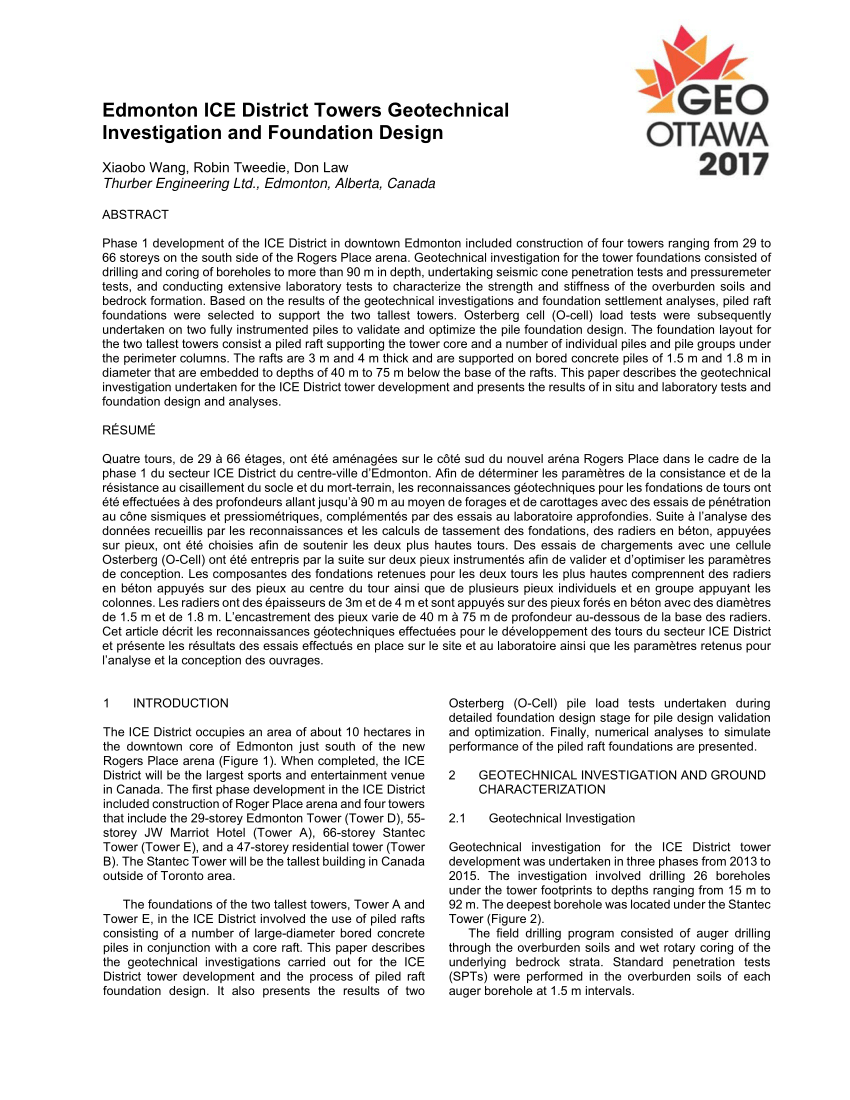 PDF | Phase 1 development of the ICE District in downtown Edmonton included construction of four towers ranging from 29 to 66 storeys on the south side of the Rogers Place arena. Geotechnical investigation for the tower foundations consisted of drilling and coring of boreholes to...

Oh, @Daveography, I am not saying that the foundation that is now in place doesn't underscore a smaller tower -- what I am saying is that no provision was made initially to accommodate a taller building which would have required a different provision for footings.
B

IanO on C2E says that we should expect an announcement in regards to Tower B before the end of the month,

Didn't give any other clues.

Guess I wasn't too far off. Seems like the trickle word on C2E is the tower is cancelled for now and they will just build the podium. I feel like the whole marketing of "Ice District" falls kind of flat without the tower or theatre or even gym/sports store that was previously proposed. No wonder sales in Stantec for condos are terrible - the whole buying into the 'lifestyle' part doesn't go quite as far.

Daveography said:
@westcoastjos Saw it, but the source is not reliable. Will wait for actual news.
Click to expand...

Marcel is usually in the loop on most things. The comment from Nicholson is definitely more grape vine though. Regardless, it wouldn't surprise me that the tower is delayed in the future. Marcel did indicate that they will design for it in the future. WTC 2 in NYC has been in this state for several years now, yet there is still intent to build. Does not need to be doom and gloom, simply wrong timing to build a tower.

There are permits in right now for constructing the tower portion of BG. The description specifies that the tower will be constructed over the podium, so I expect the tower to still go ahead, though likely not until late this year or early next.

Nosirrah said:
There are permits in right now for constructing the tower portion of BG. The description specifies that the tower will be constructed over the podium, so I expect the tower to still go ahead, though likely not until late this year or early next.
Click to expand...

Do permits expire and how much do they cost? (This would suggest they do not expire except for minimum statutory period: no idea how long that is) If the time is indefinite and the cost is negligible, there is really no reason to build a tower in the short term if the current fiscal environment doesn't fully support it. I appreciate that we all want to see development occur, but we also have to look at these projects from the business point of view. Katz is in this to make money - if that means delaying the tower until market conditions are favourable, I imagine that is what he will do.

@westcoastjos it did take a number of years for LA Live to build out -- most of the time, however, was related to land assembly and then permits through the City (which, unfortunately, can take two-years easily). Now the whole area is hopping with no less than 7 highrise towers on blocks abutting LA Live and the convention centre. In the entire downtown area (sparked in part by the development of LA Live) there are over 30 towers proposed, permitted or under construction. Permits here are good for 18 months and can be renewed for a nominal fee 3 times in 6-month increments. Once construction has begun there is a 5-year window for completion (again with extensions being able to be applied for). I haven't yet checked for Edmonton, but I imagine the process is similar.
Katz is in control of a similar land situation to L.A. live and he certainly has no need to move quickly. He can watch the build-out happen around his land holdings and then -- if he is wise (and I have no reason to doubt that he is) -- build an infrastructural wonderland in the middle that benefits from all of the surrounding developments. The only danger that he faces -- and I imagine that he thinks it a remote possibility -- is if a project component equal to or larger than the Ice District pulls attention away from his landholdings area. (From what I know -- that is, however, a distinct possibility.)

No mention of the tower (and note it is omitted from the renders. There's a Q&A at 11am, not sure I'll be there but I'm sure the question will come up.