The Brighton Block is on the block. Asking price? Slightly more than a cool $2.3 million.

The handsome 1912 brick building on Jasper Avenue and 96 Street, also known as the Ernest Brown Block, is one of downtown Edmonton’s most striking heritage resources. Now, it’s being sold as what its sellers describe as “a tremendous redevelopment opportunity.”

In 2003, the building, which was then a rooming house, was purchased by the Ukrainian Canadian Archives and Museum of Alberta. The museum, known as UCAMA, also bought the old Pendennis Hotel next door. The total purchase price was $1.6 million. The plan was to turn the Pendennis into a museum and archives, and lease out the Brighton Block to generate the revenue to operate and maintain the museum. The project’s design won a bunch of awards. The museum convinced the city, the province and the federal government to kick in major funding — a total of more than $9.2 million. Construction began in 2012, with huge optimism.
Click to expand...

I am in favor of retaining the exterior walls of the historic building with a new high rise development -- Pangman showed how effective this can be and I think that a lot of Edmonton developers took note. It could be a win-win-win situation that completes the Ukrainian Heritage Museum (which is already employing Dub magic to make it functional for its new use) while providing a new apartment/hotel venue. Edmonton is catching on quickly!

The building’s current owner, the Ukrainian Canadian Archives and Museum of Alberta (UCAMA), has just come to an agreement to sell the 1912 building to Edmonton businessman Ken Cantor and his company, Primavera Development Group.

The list price for the property at 9666 Jasper Avenue was $2.35 million, but Cantor and UCAMA won’t reveal the final price until the sale closes in April.

The deal, Cantor says, is still conditional on getting support from the city for his plans. He’s not asking for any grant money, he says. He does want the city to allow him to add a fourth floor to the three-storey building and to create a few more rear parking stalls.

“It’s a classic building,” says Cantor. “We’re not doing this willy-nilly. We want to do this right.”
Click to expand...

Edmonton developer wants to bring life back to east Jasper Avenue area with purchase of Brighton Block
Those who have been on the east end of Jasper Avenue recently have seen a building covered in shrink wrap.

If you have good knowledge of Edmonton, you’ll know that what’s underneath the wrap is part of the city’s history. It’s the old Brighton Block which has been around for more than 100 years.

The Ukrainian Canadian Archives and Museum of Alberta is selling the property to local developer Ken Cantor and his company, PRIMAVERA Development Group.

Cantor has promised to bring renewal to the building and life back to the quiet area of Jasper Avenue, helping with The Quarters redevelopmentefforts.
Click to expand... Update from Ken Cantor via C2E:

unfortunately the financing that was originally presented as being available to us when we started the process has fallen victim to changing lender criteria and requirements. it is something we are continuing to pursue along with other debt/equity alternative solutions. the vendor is also looking at other alternatives with the good news being that regardless of the final outcome something positive should be happening with the building.
Click to expand...

Wraps are off, sounds like work is starting on this one soon. @Marcanadian might be time to turn this into a construction thread?
Edmonton | Brighton Block Redevelopment | 51m | 5s | Primavera Development Group | Hodgson Schilf 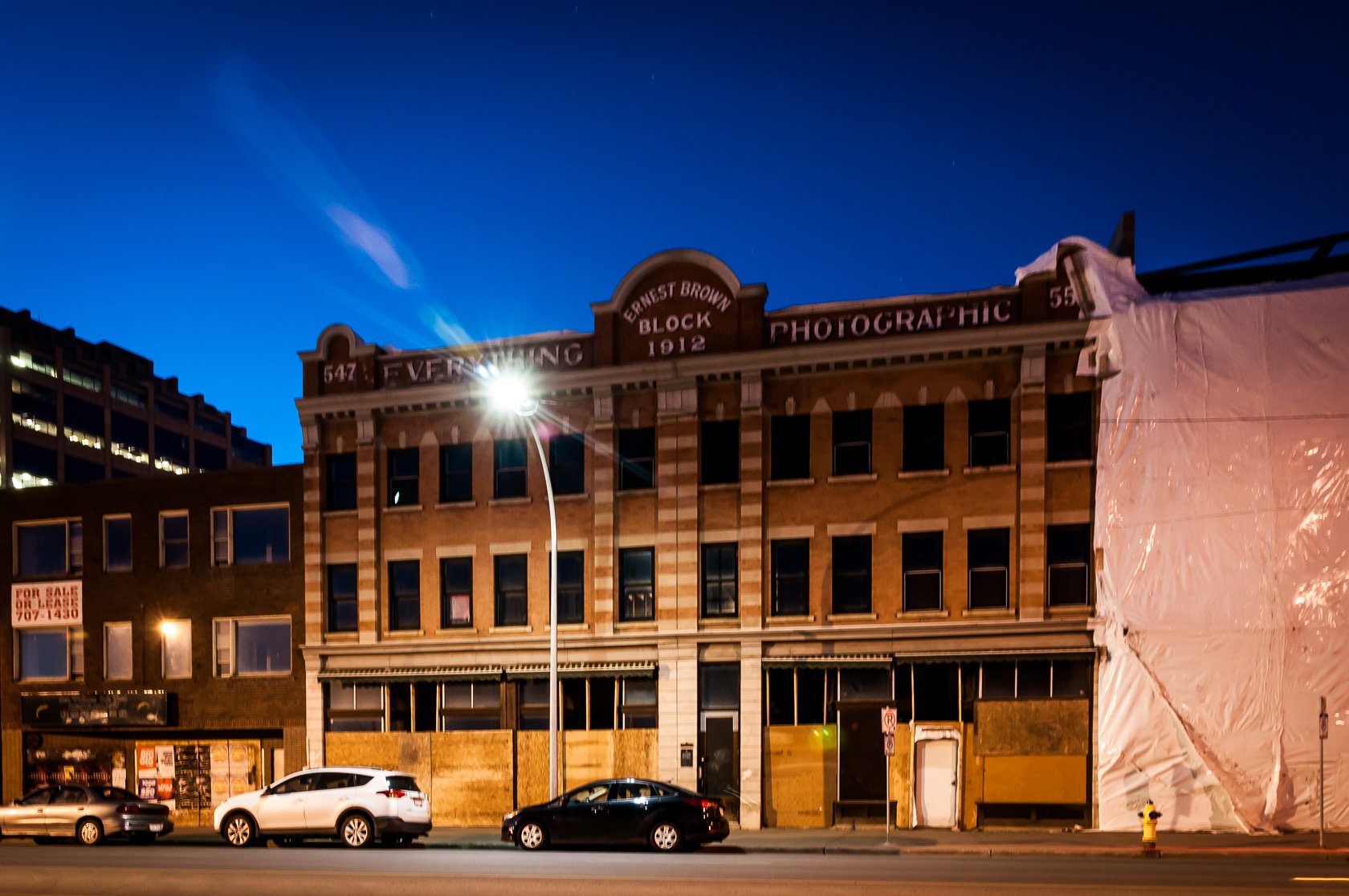 Beautiful reuse of an historical building! I wish the Ukrainian Museum next door could get to the finish line.

A photo tour of the building by my buddy Hugh:

PERMIT_DATE February 27, 2018
PERMIT_NUMBER 247253193-006
JOB_CATEGORY Commercial Final
ADDRESS 9666 - JASPER AVENUE NW
NEIGHBOURHOOD BOYLE STREET
JOB_DESCRIPTION To construct a COVERED WAY HOARDING IN FRONT OF BRIGHTEN BLOCK UNTIL NOVEMBER 1,2018 that will run along the north sidewalk on Jasper Avenue. This includes a portion with a job trailer that will be set on top. The hoarding is for overhead crane protection as part of an addition, exterior alterations, and interior alterations to an existing General Retail Stores and Professional, Financial and Office Support Services use building - Phase 1, To demolish interior structures and shoring only. (BRIGHTON BLOCK 2 Storey addition)
BUILDING_TYPE
WORK_TYPE
FLOOR_AREA
CONSTRUCTION_VALUE 10,000
ZONING DC1