A four game slide and more tough games ahead.

Curious to see who steps up.

This summarizes this home stand so far

Edmontonian said:
This summarizes this home stand so far
…
Click to expand...

what summarizes this home stand so far - the last three games in particular - is that it’s only the goal tending that has kept those games close enough for one miscue to make a difference. If it wasn’t for koskinen that miscue would have only made the difference between a 6 - 1 vs a 5 - 1 loss, not 3 -1 vs 2 - 1.

kcantor said:
what summarizes this home stand so far - the last three games in particular - is that it’s only the goal tending that has kept those games close enough for one miscue to make a difference. If it wasn’t for koskinen that miscue would have only made the difference between a 6 - 1 vs a 5 - 1 loss, not 3 -1 vs 2 - 1.
Click to expand...

I meant it in a general sense, that after putting on a ton of pressure in the 3rd period we get an unlucky bounce and find a way to lose, goaltending has been fine, my apologies for the lack of context it was supposed to be kind of funny

Lot of problems with this home stand, PP clicked twice last game but is hovering around 10% anyway I believe, PK hasn't been great they are letting in almost a goal every game. Practically no scoring, not a shortage of chances, we are getting pucks to the net and creating, just snakebitten right now. If I'm being honest this team doesn't look completely different from how it did during the 9-1 start, the pucks just aren't going in right now.

i think there might be another difference between their 9 - 1 start and now. I hate to keep coming back to it but that’s this team’s tendency to both read their own press clippings and to fall into that “boys on the bus” syndrome that ownership and management perpetuate too much and too often. those boys are now grandparents and this team - and edmonton media and fans - need to remember there was no successful legacy until those boys learned that hard work and a killer instinct from first puck drop to the end of the game was as important as talent and isn’t something you can turn on and off.

Ive been studying for finals but the Oilers have been playing hockey and they're winning! 2 wins in a row now, 5-2 against the Columbus Blue Jackets on Thursday and a 5-3 win last night in Seattle. Both important victories for our team that was near falling out of a playoff spot after their 6 game skid. Last night in Seattle was particularly impressive because we were missing half of our top 6 (Hyman; shoulder injury) (Nuge; covid protocol) (Puljujarvi; covid protocol) not to mention also losing Ryan McLeod, Duncan Keith and Devin Shore(covid protocol) as well as Kyle Turris who blocked a shot and missed last nights matchup as the Oilers were only able to dress 11 forwards. On top of that our coach is also out due to covid protocol. Despite all of this mayhem, we played some of our best hockey games, everyone in the lineup chipping in, Warren Foegele specifically. We registered 40+ shots in both games, our highest totals of the entire season and dominated play for the most part only allowing 17 shots against vs Seattle. Interesting when Dave Tippett isnt behind the bench we play some of our best hockey . Now while reading this you're probably wondering about all the covid protocol, and I'll make a post about that shortly.

Covid is still with us and it's taking over the NHL right now. Lots of news over the week but from my understanding there are currently 7 teams completely shut down until after Christmas (Detroit Red Wings, Calgary Flames, Florida Panthers, Colorado Avalanche, Boston Bruins, Toronto Maple Leafs and Nashville Predators). Along with them the Carolina Hurricanes have 6 players in protocol, the Oilers have 5, the New Jersey Devils have 5, the Seattle Kraken have 4 and the Vancouver Canucks have 6. 8 other teams have at least 1 player in protocol (20/32 teams in the NHL). Lots of staff members have been affected as well including our own coach Dave Tippett. 13 NHL referees are also in protocol.

Because of this, the NHL has decided to stop cross border games in-between now and Christmas. Meaning that there will be no games played between an American team and a Canadian team from now (December 19th) until December 26th.

https://twitter.com/i/web/status/1472687619549003781
Ontario has reduced arena capacities to 50% (Maple Leafs and Senators), the Montreal Canadiens played their last game in front of 0 fans. The Vancouver Canucks and Winnipeg Jets have also reduced arena capacity to 50%.

On the bright side all NHL players (except for 1) are vaccinated, of course this doesn't guarantee safety but it is well known to reduce symptoms drastically. I hope all players and their families stay safe and healthy, and anyone contracts Covid have a speedy recovery and be able to continue their careers unharmed.

The NHL said that they would make a statement in the coming days regarding NHL players travelling to Beijing to play in the olympics. As of right now that looks highly unlikely, which is extremely unfortunate because I was very excited to see NHL players fighting for those medals for the first time since 2014. Luckily, The World Juniors which are planned to be held in Edmonton and Red Deer for the 2nd consecutive year still seem like they are good to go.

These outbreaks are something I was really hoping wouldn't occur this season but with 32 teams and all the travelling it was practically inevitable. The omicron variant is likely the main culprit for the sudden jump up in cases within the NHL, although we had seen a few teams with trouble earlier this year it was running smoothly until now. More than half of the games on the schedule from now until Christmas have been postponed league wide. The NHL seems adamant about continuing on and not pausing the season, which makes sense from a business perspective, however at this current rate they may not be left with much of a choice.
Last edited: Dec 19, 2021

NHL Olympic participation is looking more doubtful. I want see McJesus in Team Canada colors, dammit! He hasn't had a chance to compete in the Olympics since he was drafted by the Oilers. However, I fully understand that health is more important than hockey.

while the olympics are cool with the hype and all, i’m not sure about connor but i would take a stanley cup final series over the olympics and wouldn’t risk a chance at try the cup for a chance at a medal. it’s been said the stanley cup is the hardest sports trophy there is to win and while it’s nice to compete for your country at some point the potential cost is simply too high to make sense.

Darnell Nurse and William Lagesson have been placed into Covid protocol which now means 7 Oilers are on the list. Lets hope the spread within the team slows down. Our next 3 games have been postponed anyway as the NHL has postponed all cross border games until after Christmas. With 7 players in protocol the team should not be practicing at all.

NHL players won't be going to the 2022 Beijing Olympics, a person with direct knowledge of the decision said Tuesday. The move by league and the NHL Players' Association comes amid COVID-19 concerns that have seen an explosion of cases and 45 games postponed since Dec. 13.

Maybe not the best place for this but probably too short-lived to warrant its own thread... 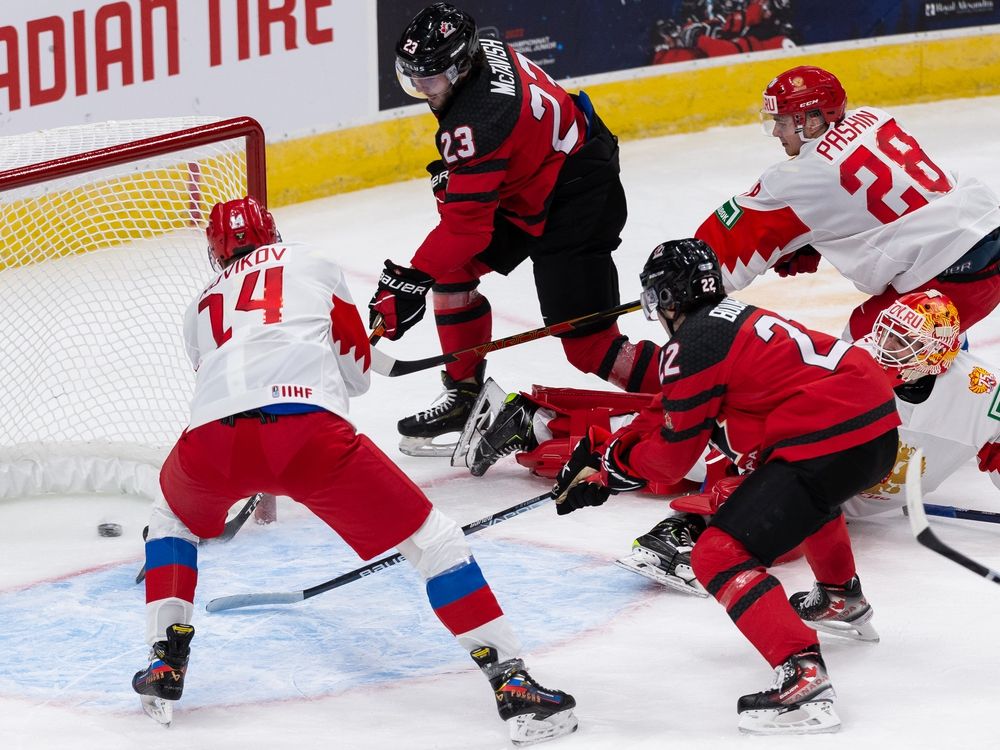 It was a win-win, with nobody hurt, although almost nobody saw it live. Maybe there were 1,200 people in an 18,347-seat NHL building that houses the Edmonton…