Looks like the Islanders forgot to bring their skates to the game yesterday -- all circles 8-0 (two little ones vs one big one.. a la goose)

The Montreal Canadiens have advanced to the 2021 Stanley Cup Final

I'm so proud of that team, they were the underdogs the entire time but play with such heart and find a way to win games. Lets hope they can do Canada proud!

Here's hoping the Isles face them and then it's a coin toss for me.
J

I want to see Carey Price lift the cup so badly. I love this team, they have a very bright future. I'm envious that they have Caufield and Suzuki, two very good players whose careers are only getting started. The Oilers could definitely use players like that. It just goes to show that despite the Oilers having two of the top 5 players in the NHL, the team itself is not built to win in the playoffs. The Habs, despite being viewed as an inferior team, have depth, grit, and a world-class goalie. Things the Oilers are missing. I mean, they were always able to beat the Oilers throughout the regular season. Their coaching system works and the players are buying into it. Very underrated team. All they are really missing is a bona fide superstar or two (Caufield and Suzuki could very well fill those spots in the near future). Bonne Fête de la Saint-Jean-Baptiste, Québec. Félicitations, Montréal!

While thats lovely let's appreciate the true Habs goal song, that should have never been changed, which I noticed they played at the end of last game

And, when youth steps up their game, watch out... 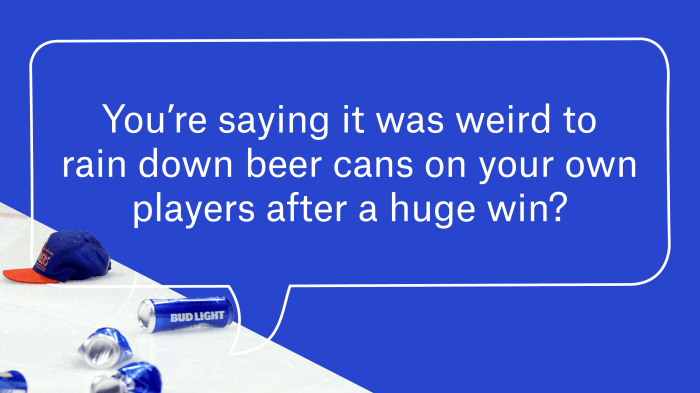 The Islanders Kept Things Interesting, While The Canadiens Shocked Us All

neil (Neil Paine, senior sportswriter): It wouldn’t be the Stanley Cup playoffs without some wild results, and the semifinal round has certainly delivered in th…

https://twitter.com/i/web/status/1409865776996179985
Wanted to wait until it was official but all the major media, including this legend, have already tweeted it so it's as good as confirmed.

https://twitter.com/i/web/status/1409865609983107074
My thoughts are that this a good signing. Of course 8 years which takes Nuge up until he is 36 is rough, but a 5.125 (million) cap hit for Nuge is excellent. I strongly believe Nuge could've got north of 6.5 on the open market, but he wanted to stay an Oiler, hence the No Movement Clause and accepting of less money for a longer term.

the NMC means that we must protect him in the Seattle Expansion Draft which of course we are going to do, we cannot trade him unless he waives his NMC, so if we want to make a deal where we send Nuge to Philadelphia he can veto it and not allow us to move him, and we cannot put Nuge on waivers if we wanted to either which is a minor thing that will only be relevant near the very end of this contract, and hopefully not even then. This does not stop all Nuge trades, if Nuge wants out he can agree to waive his No Move Clause, and if there is another expansion team when Nuge is like 35 years old (doubtful) and he isn't worth a protection, he can also waive his NMC for that in order to help us out.

This signing should help put us in very good shape for the next 5ish years depending on how Nuge regresses, and in the last 3 years of the deal it may put us in a bit of a cap crunch. We are betting on the fact that Nuge will remain a core piece for the foreseeable future. Overall this shows a win now mentality for the Oilers, risking some of our later years in order to construct the best possible team when Mcdavid and Draisaitl are at their peak.

The more fun things this brings is that Nuge should (barring any career ending injuries or him suddenly wanting out of Edmonton) break the franchise record for Games Played, by quite a bit. It also greatly increases his chances to be the first ever Oiler for life, he has a legitimate shot at being the first ever player to play their entire careers in the city of Edmonton. This contract will take him up to 18 seasons as an Oiler. McDavid and Draisaitl also love Nuge on the team, so he will now be signed at a good price for when they need to be resigned.

Just as I sent that they made it official

https://twitter.com/i/web/status/1409925482217365510
This is the structure for the contract, it is front-loaded which is good. What this means is that while Nuge is still in his prime we are paying him the most money, and once he enters his later years, should he waive his NMC, it will be significantly easier to trade him because although his cap hit will still be 5.125 million his actual salary needing to be paid would be under 4 million, which is of course attractive to owners of other teams because they have to pay less

note: sb means signing bonus, also read messages above if you missed them.

thats now 3 lindsays and 2 Harts before the age of 25... ridiculous. Heres something more ridiculous:

Summary of the stats from our very own twitter

Well.. for those who have been following the latest news on the Oilers, Duncan Keith is now an Oiler. We give up Caleb Jones (a promising young defenceman of ours) and a third round pick. Also, NO salary will be retained, meaning we will be paying Keith $5.5 million for the next two years of prime McDavid and Draisaitl years.. I am not happy about this, especially since we had all the leverage in this deal. Chicago came to us, Keith wanted out. The Caleb Jones part wouldn't have stung so much if we had gotten AT LEAST 50% salary retention, but that's a big waste of cap space for the prime years of McDavid and Draisaitl to win now. I'm really disappointed in Holland. I don't mind Keith and I think he gives us good veteran leadership and experience, but he's turning 38 in a few days and has been declining for a little while now. He's not the same player as the dynasty Chicago days. I would have expected this kind of move from Peter Chiarelli, but Holland? I had more faith in him. But I suppose we will have to wait and see how this turns out. Maybe it will help more than I think (We can only hope). My biggest gripe is the massive salary we have to pay him, losing a promising defender like Jones (though we might have lost him to Seattle anyway) and that we had the leverage in this deal and STILL got fleeced. That said, I welcome Keith's experience and leadership. He should definitely help in that area, plus, he may arguably be better and play more (at the moment) than Jones, but definitely not long term.